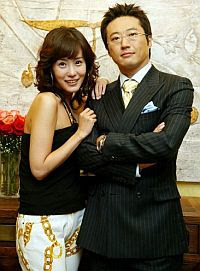 It’s rare that I reach home by 6pm, but I did yesterday and caught an episode of this drama. The main stars are Park Shin-yang (박신양) and Kim Jeong-eun (김정은), who has really pretty eyes.

Of course, I didn’t know heads or tails as I was thrown right into the middle of all the commotion. People were falling into a swimming pool, a young man told an elder to get lost and the heroine was fired by the hero boss. Then there was that issue about a camera.

I noticed that two actors from Sang Doo! Let’s go to School (상두야, 학교가자!) were also in the drama. Lee Dong-geon (이동건), who played the doctor and Jeong Ae-ri (정애리), who played Eun Hwan’s mother respectively in Sang Doo! appeared as mother and son here.

Han Ki-joo is the president of a motoring company and Kang Tae-young is a film student. She works for Ki-joo as a housekeeper (she really needs the money) but is quickly fired by him…then re-hired as his pretend girlfriend when he discovers that she is friends with the wife of a potential business partner. Also, she gets her job as his housekeeper back (girlfriend, you gotta make better deals next time).

Oh, the couple fall for each other, of course. After all, he is smart and brimming with charisma, while she is warm, spontaneous and bubbly. They become smitten with each other but that leads to a difficult break-up…in Paris.