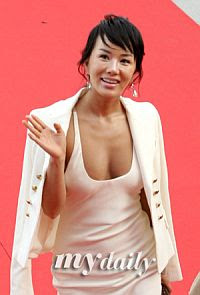 According to the Korean press, the 36-year-old singer/actress is South Korea’s answer to Madonna. She was an icon in the 90s and was dubbed “sexy queen”. She hasn’t lost her mojo and is still regarded as the sexiest star in Korea.

In 2006, a revealing outfit (is that your underwear showing, dear?) she wore during a performance for her latest album, Prestige, caused a furore among Koreans. She was harshly criticised for it.