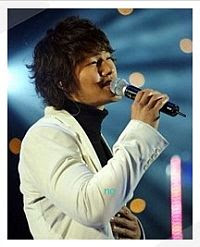 This 30-year-old is currently on national service duty so he’ll be under the entertainment scene radar for a while. Nonetheless, that did not stop him from appearing in his latest MV: Saying I Love You with his rumoured girlfriend, Yoon Eun-hye. The MV created a whole lot of buzz because of that.

Fans will not be able to see his handsome mug in the MV because only shots of his back were used. Apparently, you can’t be seen prancing around with your rumoured girlfriend in a lovey-dovey music video while doing military service!

Known for his sculpted physique, the singer debuted in 1995 as a member of the group Turbo. He then became a solo artist in 2001. It is also said that Jong-kook has a high-pitched voice and many stars have jokingly dubbed it “mosquito voice.”