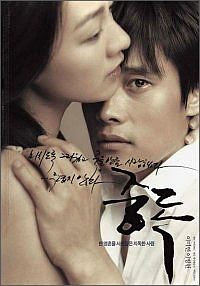 A slow burning flick but the payoff is pretty good. I kept going ‘psycho, psycho, psycho’ after the movie ended, but I still enjoyed it.

This is my first time watching Lee Byung-hun (이병헌) in action (and I don’t mean the love scene) and he’s a decent actor. The film’s part thriller and part romance. It also stars Lee Mi-yeon (이미연), Lee Eol (이얼) and Park Seon-yung (박선영).

Dae-jin has just completed his National Service and is living with his bro and sis-in-law. While the couple welcomes Dae-jin, they still hope that he will soon settle down and move away.

However, Dae-jin is simply content with the living arrangements. He gets to tinker with his race car in the garage and enter competitions. Even the amorous advances of a lovely lady named Ye-jin (Park) go unnoticed.

Unfortunately, a tragedy occurs. Both brothers meet with separate car accidents on the same day! While Ho-jin falls into a coma, Dae-jin eventually recovers but mysteriously develops the traits, personality and habits of his older brother. Ooooh, what will Eun-su do now?

Get the DVD please.