I can’t believe I overlooked this. I must do an entry on this guy.

Don’t give me that ‘what the heck is she talking about’ look! Of course, you’d have to be a total nut about comic books to agree with me.

Korean-American Jim Lee went to Princeton to become a doctor but found his true calling in comic books. He was the prized illustrator of Marvel comics. His issue of X-Men #1 is the best-selling comic book to date selling 8 million copies upon its release in 1991. He has graced the pages of The Fantastic Four, Batman and Superman and about every professional penciller would cite him as a source of major inspiration. But before my forehead gets stamped with “NERD” right across, I’ll escape by posting these 3 pieces below. 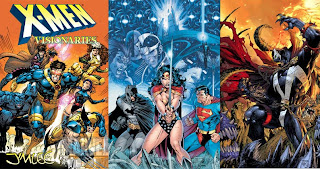