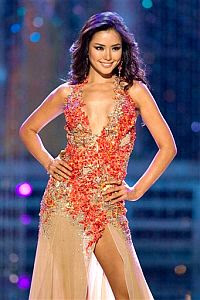 Many of you just couldn’t get enough of the gorgeous Miss Korea 2006, so we’ve decided to create a profile on the Korean beauty. Enjoy :-).

Honey Lee or Lee Ha-nui (이하늬) denies having had plastic surgery but is not against it. She is a graduate student and an accomplished kayageum (the traditional Korean zither) player. She represented Korea at the 2007 Miss Universe pageant in Mexico City; she was the 3rd runner-up.

While growing up, Honey, who is the younger of two daughters, loved sports. If she wasn’t at school or kayageum practice, she would usually be skiing, learning Taekwondo or swimming.

The self-professed “eclectic” individual has a 3rd degree black belt in Taekwondo and is a competitive skier and scuba diver!

As a professional kayageum player, Honey has already released 4 CDs and performed in more than 25 countries worldwide, including concerts at Carnegie Hall, New York.

In an interview for the Miss Universe 2007 pageant, Honey revealed that she was named a kayageum prodigy by the Kumho Art Center, which is apparently the most prestigious musical foundation in Korea.

The sexy 24-year-old is currently enrolled in graduate school at Seoul National University and her volunteer work includes working for UNICEF, Compassion and World Vision. She has a sponsored child through World Vision’s Sponsor a Child program.

Since July 18, Honey has been co-hosting Real Time TV Entertainment for the national TV network, SBS. Apart from that, she is a model for fashion brand Tommy Hilfiger (Korea).