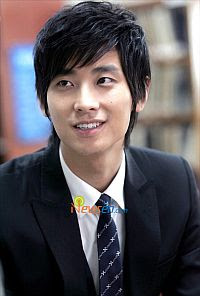 The six-foot-two hunk first started out as a model in 2003, strutting his hotness for brand names such as Calvin Klein, Levi’s and Reebok.

His acting debut was in Old Love but it was Princess Hours – adapted from Park So-hee’s manhwa series – that turned him into a star all across Asia.

In the drama, he plays the cold-hearted blueblood who is forced to marry a commoner. Of course, when a drama is very popular, you have filmmakers scrambling to make a second season of the show, but nothing is set in concrete yet. Also, Ji-hoon’s hectic schedule may prevent him from reprising his role.

The well-built actor then went on a strict diet for his 2007 drama The Devil. He lost 5kg by eating only chicken and exercising three times a day! Phew, what discipline! In the drama, he starred opposite popular actress Shin Min-a.

The 25-year-old, who is reportedly a very private man (mmm, mysterious, I like), then went on to receive a trophy on March 30, 2007 at the 1st Astar TV Drama Awards, which was held in Seoul. He was chosen for his potential to become an Asian top star. Other recipients of the award include Daniel Wu of Hong Kong, Fan Bing Bing of China and Wilson Chan of Taiwan.

Ladies, put on your fireproof outfit as I present you, Joo Ji-hoon: