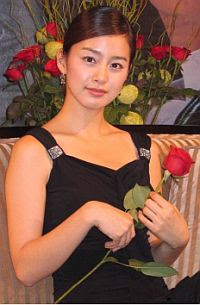 In a land where plastic beauties are everywhere, Kim Tae-hee is one of the rare gems. The natural beauty started out as a model before venturing into acting in 1998.

The public only started to take notice of her in 2002 when she appeared in the TV sitcom, Let’s Go. However, she became a star the following year after playing the nasty stepsister in drama Stairway to Heaven, which starred Kwon Sang-woo and Choi Ji-woo.

Her popularity increased when she starred opposite Kim Rae-won in the drama Love Story in Harvard (2004).

The 27-year-old then made her movie debut in 2006 with The Restless, which unfortunately flopped. The latest news on her is that she’s working on a TV drama entitled Angel.