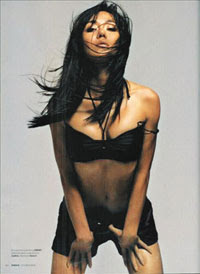 Koreans call her a World Star because she’s known all over the globe for portraying Sun Kwon in the hit series Lost. Born in Seoul, Yun-jin migrated to the US with her family when she was 10 and grew up inNew York.

After earning a degree in drama at Boston University, Yun-jin devoted herself to fulltime acting. The theatre and TV actress managed to get several minor parts on MTV, in soaps and on the off-Broadway stage. In 1996, producers of a Korean TV show in Manhattan called and persuaded her to return to Korea to appear in a TV drama. She accepted, and the rest, as they say, is history.

The 34-year-old made her film debut in the movie Shiri (1999), which turned out to be Korea’s first blockbuster and the highest-grossing film in the history of Korean cinema. Her sexy assassin role in the movie not only made her a household name in Korea, but also made her a star in Japan, Taiwan and Hong Kong.

And of course, we all know her as Sun – the quiet, plain Jane wife of Daniel Dae Kim’s Kwon Jin-soo. Sun may be a simple and conservative dresser but boy, can Yun-jin vamp it up in real life (pic from U.K. Arena’s Oct 2006 issue!).

Yun-jin appeared in Maxim in March 2007 and was dubbed the “Korean Julia Roberts”. Apart from that, she penned a book about her struggles and triumph in Hollywood. The book entitled The World is Your Drama was launched in June 2007 in Korea.

Can’t get enough of Yun-jin? Then surf on to her official website.