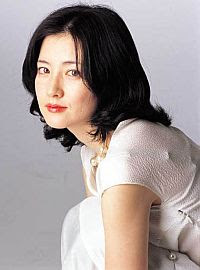 Helen of Troy may be the face that launched a thousand ships but Lee Young-ae is the face that sells more than a thousand electronic products. In January this year, the LG Group gave her a gift of appreciation for being such a successful promoter of their LG Electronics products.

Miss Lee struck entertainment gold when she appeared in the popular Korean drama Dae Jang Geum or Jewel in the Palace. The drama was so well-received that several countries showed re-runs of it shortly after the last episode aired. Not only that, it has been reported that half the population of Hong Kong was at home watching the last episode. Ooh, talk about addiction!

Naturally, Miss Lee became hot stuff and was invited to fan meetings in Hong Kong, Singapore, Taiwan, China and Japan, with hordes of fans trailing her wherever she went. Her Dae Jang Geum role was so popular that she, like Rain, has her image plastered onto the side of the plane she flies (pic below).

Miss Lee is also a giver and is involved in many charities. In 1997, she was in Ethiopia as a Goodwill Ambassador for an NGO and in 1999, she did a TV show on the caste system in India. 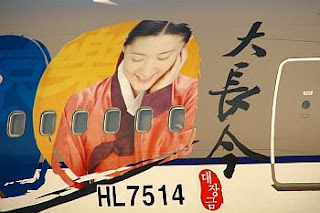 When 2001 rolled by, Miss Lee published her charity work experiences in the book entitled A Most Special Love. The Korean sweetheart then donated all of the proceedings from the sale of the book to charity. In 2004, she was appointed Goodwill Ambassador of UNICEF.

In her 2006 autobiography entitled Young-ae’s Vow, the star talked about how she decided to become an actress. The pivotal moment came when she worked with Andy Lau in a chocolate advertisement in 1991. 😉

Of course, she also starred in the 3rd installment of director Park Chan-wook’s popular vengeance trilogy, Sympathy for Lady Vengeance.

Miss Lee has been quoted as saying that one thing she never wants to lose is her ability to act from her heart.