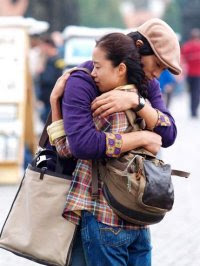 Channel surfing has its rewards. Was doing it recently when I stumbled upon this drama on AEC – one of the Chinese channels on Malaysia’s one and only satellite network, Astro.

I only managed to catch 15 minutes of the 5th episode (yeah, the drama just started! It’s still not too late to catch it!) so can’t say much about it.

It stars the talented Jeon Do-yeon, the first Korean actress to win a best acting award at an international level (Cannes Film Festival in May 2007).

Yoon Jae-hee (Jeon Do-yeon, 전도연), who is the President’s daughter and a Korean diplomat in Prague, just got over a break-up with Ji Young-woo (Kim Min-joon, 김민준), the son of a prominent Korean businessman. It took her 5 years to deal with it.

Meanwhile, Choi Sang-hyun (Kim Jo-hyuk, 김주혁) is a detective who is in Prague looking for his ex-girlfriend Hye-joo (Yoon Se-ah, 윤세아). She broke up with him over the phone from Prague and that just didn’t sit well with the bloke.

As fate would have it, Jae-hee and Sang-hyun’s paths cross and as usual, they get on each other’s nerves first before becoming friends. And when they return to Korea, love blossoms between the pair but that doesn’t sit well with their respective exes (good grief, make up your minds people). Also, their different social status puts their love to the test.