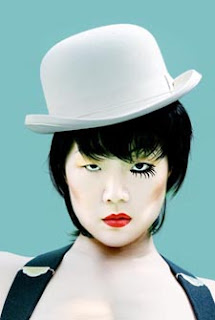 Well, I did say that when an Asian stand-up comedian “takes the mic, I’m right there cheering them on!” And so here I am cheering on Margaret Cho even if she fails to strike my funny bone.

Cho began her career in stand-up at 16 frequently performing at the comedy club, The Rose & Thistle, above her parents bookstore. She took part in a comedy contest and won first prize – to open a show for Jerry Seinfeld. Given this kickstart, Cho packed her bags and moved to Los Angeles.

Cho became a national celebrity in her 20s. Her work has always been provocative, promoting the feminist cause and gender equality, vocal about gay rights issues and strong left-wing political views. Throughout her career she has performed many successful shows such as the off Broadway one woman show titled I’m The One I Want in 1999, Notorious C.H.O in 2001, and her State Of Emergency tour in 2004. In 2007 she was awarded the Best Comedy Performance award at the Asian Excellence Awards.

Visit Youtube for more videos as this is the only
PG rated material I was able to find of her work.

Margaret Cho maintains a blog where she expresses her views on all topics, political or popular. Check out her blog here or visit her official website to get to know more about this one woman powerhouse.