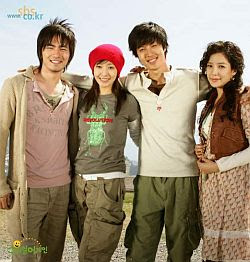 Yoo hoo, all Lee Dong-gun fans, listen up! Your fav Korean star will soon be appearing on 8TV in the 2006 drama Smile Again! Cool bananas or what?

If you don’t mind the show being dubbed in Mandarin (personally, I dislike it. The out of sync mouth-audio thingy gets to me) then make sure you clear your schedule on the night of Aug 16 and make a date with Dong-gun & gang. The series will be taking over the time slot of Really, Really Like You/ Love Truly, which is wrapping up soon.

You heard it here first!…What are you sayin’? You mean you also saw the promo trailer last night? *sheepish smile*

The beautiful Kim Hee-sun (김희선), who will be tying the knot with her businessman boyfriend in Oct (but that’s another story), and Lee Dong-gun (이동건) co-star in this romance drama.

Lee plays Ban Ha-jin, an orphan and high school dropout who is manipulative, ambitious and cunning. While in Switzerland, he meets Yoon Jae-myung (Lee Jin-wook, 이진욱), a wealthy and famous baseball player from high school. They become fast friends.

Enter Oh Dan-hee (Kim), Ha-jin’s ex who is also into baseball/softball. She develops close ties with Jae-myung. Ha-jin is jealous.