Which basically means, Rising Gods of the East.

OK final word on how to address this group: will be using TVXQ (Tong Vfang Xien Qi) even if their Korean moniker is DBSK (Dong Bang Shi Ki) because they are known as the former here in Malaysia. 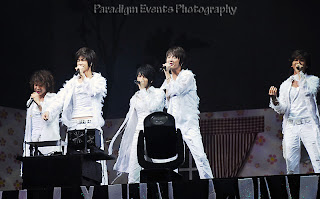 They were the first Korean act to hold a concert in Malaysia! The highly-anticipated concert called Rising Sun 1st Asia Tour was held at Putra Stadium, Bukit Jalil on July 14, 2006! (Were you there? We weren’t because we weren’t K-popped yet).

The quintet made their very first public appearance on Dec 26, 2003 during the BoA and Britney Spears’ showcase in Korea. The following year, they released their debut album, Tri-angle.

At one point, the group’s agency SM Entertainment considered adding a Chinese member to help boost the quintet’s popularity in other countries, but the idea was quickly scrapped after much opposition from fans!

TVXQ was kept really busy in 2005 as they released a few Japanese singles and their 2nd Korean album Rising Sun. Promotional activities for the album were inclusive of the tour mentioned above. 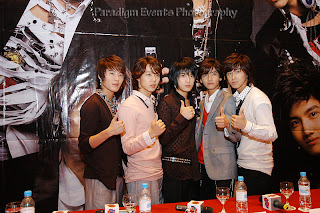 
After that, it’s back to the recording studio for the guys as they prepared their 1st Japanese album – Heart, Mind and Soul – released in 2006. In March this year, the band released their 2nd Japanese album, Five in the Black.

Earlier this month, the group’s latest single Summer Dream topped the Japanese music chart. The boys have been holding performances in Japan from May until July.

Apart from that, the busy, busy bees also kicked-off their 2nd Asian tour in Feb 2007, after the release of their 3rd Korean album – “O” – Jung.Ban.Hap.

And loads and loads of singles.