Cha Tae-hyun is a South Korean actor, TV personality and singer! He made his debut in 1996 in the Korean television drama ‘Papa‘. Two years later, in 1997, he acted in his first feature film, ‘Hallelujah‘ and in 2001 he made his singing debut.

He is probably best known for his 2001 lead role in ‘My Sassy Girl‘ (엽기적인 그녀). This film shot Cha to stardom as it was not only extremely successful in South Korea, but it became a mega blockbuster in Japan, China, Taiwan, Philippines, Hong Kong, Singapore, Vietnam and Indonesia. (Liz, Rooster: Sounds like we must watch this huh?)

Not famed for his good looks, he is much liked because he is a natural comedian, and is very adorable on-screen. (Liz was totally smitten by his trot singer role in Highway Star.)

Actor Cha Tae-hyun has visited Malaysia! Cha was in KL with Korean actress Song Hye-kyo in February 2006 to promote their movie ‘My Girl & I‘. 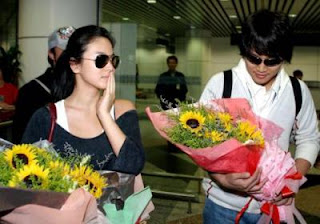 Just when i was thinking that Korean stars seldom get married (think Lee Byung-hun, Won Bin, Ahn Jae Wook), nor are they attached, this one’s taken. Cha married his high-school sweetheart, Choi Eun-suk after 13 years of courtship on June 1, 2006 at the Walker Hill Hotel in Seoul.