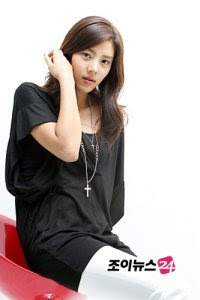 This entry is dedicated to One Big Hallyu Fan – you know who you are. How’s the weather like in Singapore? 😉

A K-popped! friend mentioned Son Dam-bi so I just had to check her out…and I’m glad I did!

Finally, a Korean beauty who doesn’t rely on her sex appeal to gain attention but one who is a bona fide dancer!

Dam-bi, who used to appear in other stars’ music videos made heads turn when she busted a move opposite Poppin’ Hyun-joon in an MP3 player commercial.

The hype that was generated from the commercial even lead to a pre-debut documentary for MSN Japan. The documentary chronicles the singer/dancer’s journey leading up to her debut in June 2007.

It is reported that Dam-bi trained with a well-known American choreographer (it didn’t say who) to prepare for her debut. Her first single is a hip hop dance number entitled Cry Eye. It’s pretty good, hit the link to watch it.