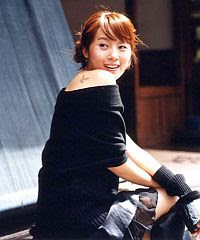 I’m really impressed with how compassionate Korean stars are. Instead of getting drunk, flashing their privates to the public or getting arrested for DUI, these talents actually put their money and star power to good use. The world is definitely a better place with them around.

Ballad singer Lee Soo-young, who just released a new album after a 20-month hiatus, is set to hold her comeback performance at a hospital. She will be performing tomorrow (Sept 12) at the Yonsei University Severance Hospital in Shinchon. And who will be her audience? Children from the hospital because she absolutely adores kids.

The showcase is entitled Tomorrow’s Children with Lee Soo-young. The child patients and their parents will be serenaded with new songs from the 28-year-old’s latest album (her 8th!) as well as previous hits, including Grace.

To make the showcase even more special, Soo-young’s celebrity friends have also volunteered to appear in the show. Park Soo-hong will emcee while Lee Hyo-ri, Park Kyeong-rim, Lee Ki-chan, Jang Nara and Kim Yoomi will be attending.