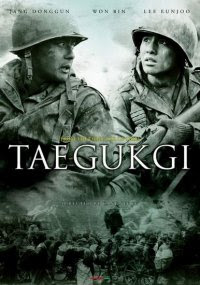 Gosh, so much. I’ve been putting off writing a review on this excellent movie because I don’t know where to begin. There are so many layers to the film, you’ve just got to watch it and let it speak to you. I guess the best way to go about this is to tell you what I took away from it.

A stirring (and sterling) piece by director Kang Je-gyu (강제교). This Korean blockbuster is about two brothers who are forcibly enlisted in the army when the Korean War breaks out. Elder brother Jin-tae makes a special request to be in the same platoon as Jin-seok, who has an ailment. 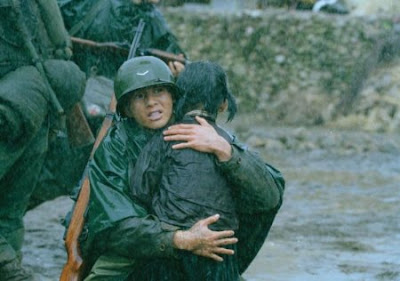 Compassion: Jin-seok (Won Bin) shows that he’s a human first
before a soldier.

Jin-tae then takes on every suicidal mission in order to obtain the Medal of Honour, which will permit his brother an early release from the military. However, in his lust to achieve his goal, he alienates Jin-seok, who becomes jealous and confused with the stark changes in his brother. What will their fate be?

We bought a special 2-disc set. The movie is on DVD while the Making of documentary is on VCD. Well, I wouldn’t actually call it a documentary because it’s basically behind-the-scenes footage clumsily put together. There’s no narration or a systematic flow to the “documentary”, but among the things packed into the one-hour disc are:

Verdict on the Making of documentary: Amazing dedication, passion and hard work went into the film. I’m so happy I got K-popped I could cry. Hallyuwood rocks!