As promised, K-popped! got its hands on the movie list for the upcoming Korean Film Festival organised by Golden Screen Cinemas, Malaysia’s largest chain of cinemas!

Eight movies will be showcased during the festival and they are:

JSA – Joint Security Area (2000)
Director: Park Chan-wook
Starring: Lee Young-ae, Lee Byung-hyun, Song Kang-ho and Kim Tae-woo
Synopsis:
Two North Korean soldiers are killed on the Bridge of No Return at the DMZ (De-Militarized Zone). The North claims that the incident was an attack by the South Koreans while the South claims that one of their soldiers was kidnapped.

Enter Major Sophie E. Jean, a Korean-Swiss Army Intelligence Bureau officer who is tasked to solve the dispute. It’s a tough case to crack as both sides refuse to cooperate, but as Major Jean investigates, she uncovers a rather surprising friendship between the opposing parties.

Art Museum by the Zoo (1999)
Director: Lee Jeong-hyang
Starring: Shim Eun-ha, Lee Sung-jae, Ahn Sung-kee and Song Sun-mi
Synopsis:
From the same director who brought us the 2002 drama The Way Home, this romance flick is reportedly based on the helmer’s own experiences. On leave from the military, Chul-soo returns to his fiancee’s empty apartment. He cleans up the place and cooks for her but soon discovers that she has moved out! He also receives the heartbreaking news that his fiancee has already married another man.

With nowhere to go, the new tenant, who is a wedding videographer, decides to let Chul-soo bunk in with her. The lady also happens to be penning a screenplay for a competition and as things turn out, the pair teams up to work on it – a love story between a woman who works at an art museum and man who works at the nearby zoo. 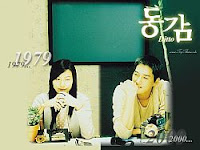 Ditto (2000)
Director: Kim Jung-kwon
Starring: Kim Ha-neul and Yoo Ji-tae
Synopsis:
Ham radio and time “travel”, this sounds very much like Jim Caviezel’s Frequency. Oh and with a romance going on, throw in Keanu Reeves’ The Lake House (which incidentally is a remake of the Korean movie Il Mare) as well.

During the lunar eclipse of 1979, college student So-eun comes in contact with a stranger through a ham radio. She discovers that the man she is talking to is attending the same university so they decide to meet the following day.

Both turn up for the appointment yet miss each other. Angry, So-eun gets in touch with her friend again only to discover that he is living in the year 2000! Last Present (2001)
Director: Oh Ki-hwan
Starring: Lee Young-ae and Lee Jung-jae
Synopsis:
A marriage that is on the verge of breaking down finds new life through laughter and….er, terminal illness.

A Day
Director: Han Ji-seung
Starring: Lee Sung-jae and Ko So-young
Synopsis:
Suk-yoon and Jin-won are college sweethearts. After tying the knot, the couple wants to start a family. One day, they receive the news that they are pregnant. They are overjoyed and their days are filled with anticipation and love until they discover that what they thought would be a lifetime with their child will not last more than a day!

My Heart (2000)
Director: Bae Chang-ho
Starring: Kim Yu-mi, Kim Myung-gon and Yun Yu-sun
Synopsis:
At 16, Sun-yi was married off to a 10-year-old spoilt brat, who grows up to be a 20-year-od spoilt brat. Their marriage is an unhappy one and when her husband brings home his mistress, Sun-yi decides to leave him. The film mostly follows her journey of self discovery after she sets out on her own.

I Wish I Had a Wife (2000)
Director: Park Heung-sik
Starring: Jeon Do-yeon and Seol Kyeong-gu
Synopsis:
Kim Bong-soo is a manager at a small bank in an apartment complex and he is a diligent and hard worker. One day, he decides to break routine after an incident causes him to realise that his life is consumed by work. Little does he know that he has an admirer in Won-ju, the lady who works across the street. Romance blossoms?

Just Do it (2000)
Director: Park Dae-young
Starring: Ahn Suk-hwan, Park Sang-myeon, Park Jin-hee and Jung Jun
Synopsis:
Byung-hwan and his family live from hand to mouth but their fortune changes after an accident.

Phew, that took some time to compile. Anyways, which movies have you watched and what would you recommend us? Ditto, JSA and I Wish I Had a Wife sounds interesting to me :-).