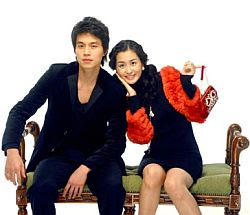 Put her in any difficult situation and she’ll probably sweet-talk her way out of it! You can’t really blame her though, since she was brought up by a gambling Dad who brings her nothing but trouble.

The male lead – Seol Gong-chan – is played by Lee Dong-wook (이동욱), who acts all icy but still makes great eye candy. Hey, did you notice how milky white his complexion is? It’s like tau foo fa (soya bean curd)!

The supporting cast is made up of the androgynous Lee Jun-ki (이준기) and Park Si-yeon (박시연). The former plays a player (sic) who also has the hots for Yoo-rin while the latter plays a tennis star. 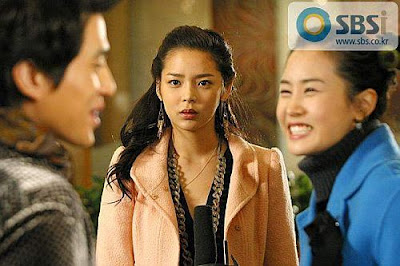 Unhappy camper: Park (centre) is about to hit Lee Dong-wook (left)
for joking about her face with Lee Da-hae.

Ummm, does Park have cheek implants or something? She looks weird and I didn’t like her portraying the character who is fighting for Gong-chan’s affections. She should just, like, go away already.

The other actors in the drama also shine. I thought Grandpa (Byun Hee-bong, 변희봉) is hilarious, especially when he blatantly shows favouritism towards Yoo-rin and treats Gong-chan (who does everything for him without complaining) like dirt…but in a funny way.

Meanwhile, the side plot on the blossoming romance between Gong-Chan’s aunt (Choi Ran, 최란) and the handyman around the house (Ahn Seok-hwan, 안석환) nicely melds with the main plot thread.

Tour guide Joo Yoo-rin works hard for her money but unfortunately, Dad gambles it all away. While on the run from the loan shark, she meets Seol Gong-chan who is the heir to the owner of a chain of hotels. Her fate changes. 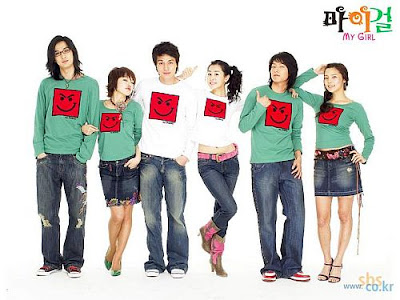 Have a nice day: Is everyone a Bon Jovi fan or something?
Why are they all wearing the smiley from Bon Jovi’s Have a Nice Day album?

Since the young man is desperate to find his long-lost cousin sister for his dying grandfather, he “hires” the happy-go-lucky Yoo-rin to pretend to be his missing cousin. After all, Yoo-rin is very convincing when it comes to twisting the truth.

However, things get complicated when Gong-chan falls for the exuberant Yoo-rin.

Watch it:
Get the box set, please. A special thanks to Tan for lending K-popped! the DVDs. 감사합니다! *hugz*