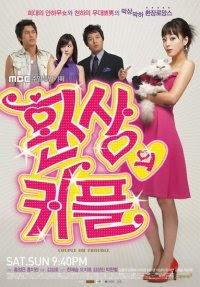 Oh Ji-ho’s (오지호) a hunk. Nevermind if he was an unknown actor for the first 7 years of his career. What matters is that we now know about him through this comedy where he stars opposite Han Ye-seul (한예슬).

Now that Hyunbin’s Snow Queen has ended its run, this drama has taken over the slot at 8TV. I only managed to watch an episode (last night) and it was pretty hilarious. I totally enjoyed the waltz Anna (Han) performed while in a drunken stupor.

And how about that Chul-su (Oh), huh? A small-time construction business owner who lives with his three nephews, the man lets Anna stay with him after realising she has developed amnesia! However, Anna, who has a diva attitude, proves to be one big pain in the @$ to Chul-su.

Oh Ji-Hunk: A reason to tune in to the show every night.