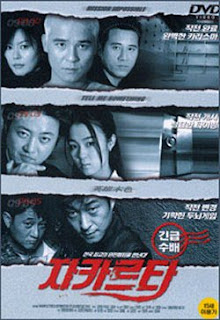 A thoroughly entertaining caper movie that is a little rough around the edges. It reminds me of The Usual Suspects, where your initial perception of things isn’t necessarily what’s actually going on. The movie then rewinds time to show you the real situation, leading you to another conclusion altogether.

Such a grand concept can easily be messed up but director Jung Cho-shin (2003’s Love: Impossible) handles it rather well. At the most, the flick is a little sloppy.

For one, it doesn’t give you any warning when it begins its flashback. It’s such a brief blink-and-you’ll-miss-it moment. Also, the complicated web of intrigue takes a while to digest and I found myself connecting and re-connecting the dots again and again in my head. Is a caper flick supposed to make you think so much? 😛

Nonetheless, I enjoyed the movie. I got sleepy-eyed during the first hour when the story unfolded linearly, but was wide awake when the real situation is being revealed. Must be all that mental stimulation, which might not be such a good thing to some.

Three sets of robbers are unfortunate enough to pick the same bank to rob at the same time! They foil up each other’s plans, or so it seems. However, the situation is so messed up that things may just be going according to plan!

Oh, and why Jakarta? Apparently, Jakarta is a slang for the Perfect Crime.