Shocking news. An 8-year-old Korean girl is dumped by her adoptive parents after they decided she did not “fit in” anymore! What the fish?!

Born in Daegu, Jade is now in danger of ending up as a displaced orphan in Hong Kong.

Back in 2000, Jade was adopted by Dutch diplomat Raymond Poeteray – who was working in South Korea – and his wife. At that time, the wife reportedly believed she was infertile, but the couple has since had two biological children. 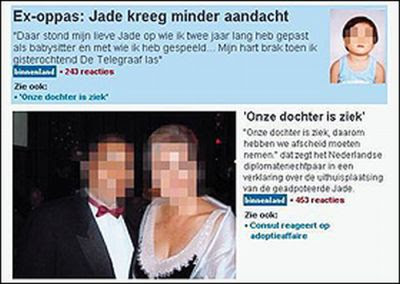 They moved to Hong Kong in July 2004 and early last year decided that they didn’t want Jade anymore. Jade was left in the care of the Hong Kong Social Welfare Department. The child abandonment case made headlines and sparked an international outcry.

Since September, many have stepped up, expressing interest in adopting Jade, but there’s a problem with the child’s citizenship.

Her adoptive parents didn’t get her a Dutch citizenship (!!! What the fish?) and she does not have residence rights in Hong Kong. Little Jade can’t speak Korean, only English and Cantonese.

An interview with an Indonesian maid who has previously worked for the couple revealed that the Dutch pair treated Jade differently from their own children. The wife rarely hugged the child.

The Poeterays have written to the daily De Telegraaf defending themselves. They said: “After our daughter came to our family we found it was hard to make real contact with her… in 2004 Hong Kong medical specialists diagnosed that she suffered from fear of bonding in a severe form.

“Despite what was written in the media we are not trying to get rid of our daughter and have not formally given her up.”

Oh yeah? Then what do you call leaving a kid in the welfare home? A kiddie vacation? Good grief, these people make my blood boil. Over and out.