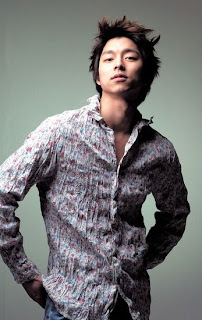 Said to be jokes and play off camera, this hallyu star is all business when the camera starts rolling and it’s time to work.

Gong Yoo began his career in entertainment with small parts on cable TV (he was a VJ for Mnet) but casting directors realized his potential and he soon found himself in television dramas.

His first role was the student and because of his boyish good looks he was typecasted as another student (Hello My Teacher)… and then another (My Tutor Friend)… and another (Spy Girl). However, it was not all in vain as the actor bagged the New Rising Star Award at the 2003 SBS Drama Awards.

Sick of remaining in the twilight zone of academia, this 28 year old cutie decides that it is now time to bury the book bag and move ON.

Gong Yoo took a break from television (I assume in 2004 as no dramas of his aired that year) to concentrate on making movies and upon his return to TV land, he was pleasantly awarded his first main role in One Fine Day where he plays a backstreet gangster. You see, too much school is never a good thing I say.

In 2007, Gong Yoo landed the leading role alongside actress Yoon Eun-hye in the drama The Coffee Prince, the aromatic love tale that tantalized the senses of every hallyu fan. 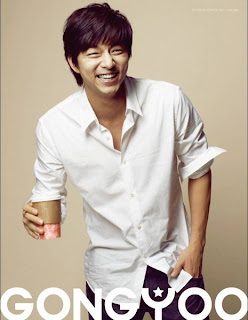 With his fast rising fame, this cutie-pie tips our beloved Energizer Bunny (Rain) off the scale and takes his spot as the male face to the premium cosmetics brand Ohui. He now can be found on merchandise from calendars to coffee cans.

An adorable face with a charming character to match? I’d say Gong Yoo will be making the ladies go weak in the knees for a long time to come.

Give it up for Gong Yoo people!