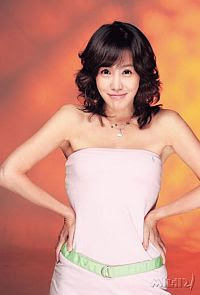 When I first saw her in Lovers in Paris, I thought she was absolutely adorable. Who wouldn’t be drawn to those mesmerising doe-like eyes…even if she went under the knife to get them?

The 32-year-old openly confessed that when she graduated from high school, her mother allowed her to undergo plastic surgery as a graduation gift. Man, these Korean surgeons are skilled to the max, I tell ya.

Once a much sought-after face for Korean TV commercials, Kim hit the big time after starring in Marrying the Mafia (2002) and Lovers in Paris (2004).

The plastic beauty was in a two-year relationship with her Lovers co-star Lee Seo-jin. They met while filming the drama in 2006, but broke up in Nov 2008.

I give you the lady with the doe-like stare, Miss Kim Jung-eun.

Hit me with more of her stares:
Stars and babies spread Christmas cheer