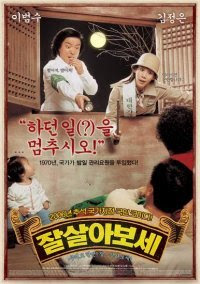 Vasectomy, the Pill, condoms and a young lady named Hyun-joo who is attempting to get an entire village excited over birth control. Hilarity ensues since the village boasts the highest fertility rate in the country and its people are simple farmers who are hard to persuade.

As an incentive to achieve zero-population growth in a year, the government promises to clear the debts incurred by the village. Hyun-joo (Kim Jung-eun, 김정은), a single lady who doesn’t have much experience of her own, enlists the help of village leader, Byun Suk-gu (Lee Beom-soo, 이범수).

Leading by example, Suk-gu undergoes vasectomy in support of the campaign. So serious is he about it that he even sends those who can’t keep to the program away from the village. However, things become complicated when Suk-gu discovers that his wife is pregnant!? 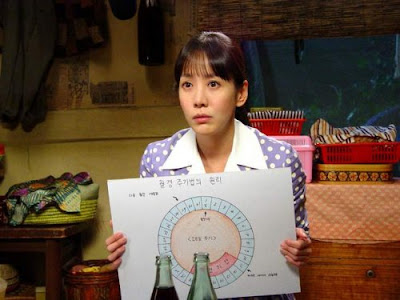 Monthly cycle: Hyun-joo educates the women villagers
about their body

Set in the 1970s, this comedy is actually inspired by a South Korea government policy during that time. It revolves around a poor farming village aiming for zero population growth in return for a substantial government subsidy.