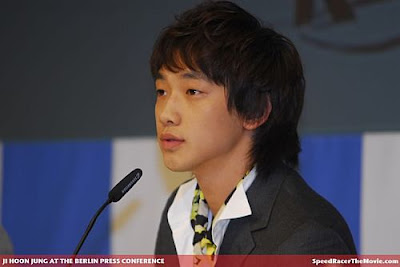 We don’t have to explain the buzz over the action-adventure flick, right? Right?

Ah well, in case you don’t know, Bi, real name Jung Ji-hoon, will be making his Hollywood debut in a supporting role in the movie. He plays Taejo Togokhan, one of the titular character’s (played by Emile Hirsch) rival.

There are loads of goodies at the movie’s official website such as the 40-minute podcast of the Berlin Speed Racer press conference on May 31, 2007. While you’re waiting for the file to download, you could check out the full transcript of the press conference. 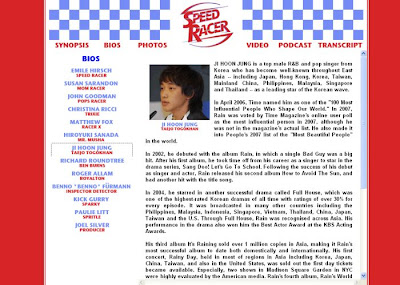 Apart from that, there are the usual movie synopsis, actors’ bios, press conference pictures and a selection of videos. Unfortunately, they do not have a video featuring the Energizer Bunny .

However, I’m sure more stuff will be added to the site as the movie release date nears.