K-popped! has gone all the way to Beijing in search of authentic Korean food. I think it’s high time we made a trip to Koreatown in Kuala Lumpur. Where would that be? Even though there are large communities of Koreans in Sri Hartamas and now Taman Danau Desa, Ampang is an area long known for its large number of Korean expatriates.

So one glorious Sunday morning, K-popped! Trio took a drive to Ampang. Since Rooster used to live in Ampang and was familiar with the roads, she drove us there.


On the way to Ampang, we drove pass the magnificent Kuala Lumpur Twin Towers (KLCC) and Nikko Hotel. Although Nikko Hotel might seem an unimportant landmark to some, we were very excited to see it because it was where Rain and his entourage stayed during his 2007 visit to KL.

Nikko Hotel on the left, Citibank tower on
the right at the Jalan Ampang crossroads

Without a proper tour guide, we decided to try our luck and headed to an area opposite Ampang Point shopping complex. The area is called One Ampang Avenue. To get there, turn right at the traffic lights directly after Ampang Point (the shopping center would be on your left).

One Ampang Avenue: You will see a Powerscreen
outdoor screen as you turn right into the area

We were so amazed and excited to see so many Korean shops! *duh* No wonder it’s called “Koreatown”! Except for two middle eastern shops, the rest were Korean shops. Korean restaurants, Korean hair saloons, Korean mini-marts and even a church!Unfortunately since it was a Sunday, many of the shops were closed.

Koreatown on a Sunday afternoon

A church at Koreatown with church goers outside,
right after Sunday service 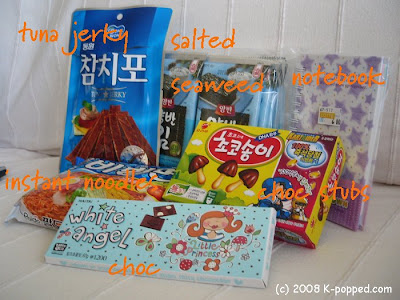 Some of the tid bits we bought from the various supermarkets
Related:
Lunch at Han Woo Ri, Korean BBQ restaurant
Prev Article Next Article
Tags:K-popped travels