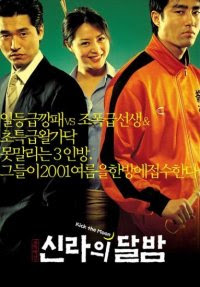 Kim Hye-soo is really adorable in this movie. She plays a sassy local restaurant owner who comes in between two former high school buddies.

The funny thing about the friends is, both of them chose unexpected career paths. The bad boy of the school Gi-dong (Cha Seung-won, 차승원) turned into a strict schoolteacher(!), while the smart kid in town, Yeong Joon (Lee Seong-jae, 이성재), is now an elite member of the revered Gil-Nam gang!

Their paths cross once again, and the men recall the fateful night that changed their lives forever. They share a couple of laughs over it and seem to be the best of friends, until they meet Joo-ran (Kim Hye-soo, 김혜수), the sister of Gi-dong’s troublemaker student Joo-seop.

Both men fall for her and declare war on each other in their efforts to win the hand of the ramyeon restaurant owner. It’s funny to see what the men get up to to get the attention of Joo-ran.

Gi-dong, the physical education teacher, starts weight-training, while Yeong Joon, who never leaves home without his men goes on a rather crowded (and boisterous) date with Joo-ran. 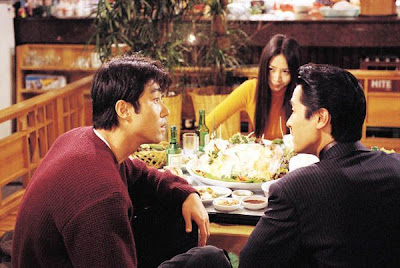 Two men and a lady: Joo-ran (Kim, centre) watches as the two men fight over her

Also, check out how Joo-ran, who is in want of a helper at the restaurant, gets the men to voluntarily help her out. Or the part where she orders them to hold hands (and swing it!) while walking home in order to salvage their friendship. She’s one sassy minx indeed.

But things get complicated (as it always does) when Yeong Joon’s dealings with a local Big Brother turn sour. The old friends, who have a harmless rivalry going on, may now have to put aside their competitive streak and team up for old time’s sake. 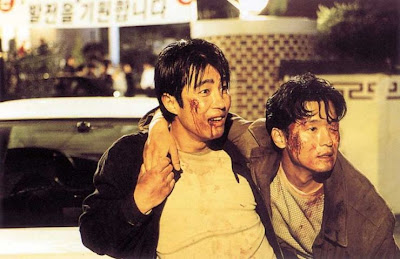 Two former highschool buddies reunite and promptly find themselves falling for the same woman. However, both men will also have to deal with and overcome their personal problems. Will they remain friends or become enemies? Will it be a classic case of love vs. friendship?

Please get the DVD.

My copy was part of the stash I took from my friend’s house. OK, so I took 7 movies, which means I’m almost done with all of them. Almost….