South Korea’s national treasure No. 1 – the Sungnyemun, or more commonly known as Namdaemun, which means South Gate – was set ablaze by an arsonist on Sunday (Feb 10) night! 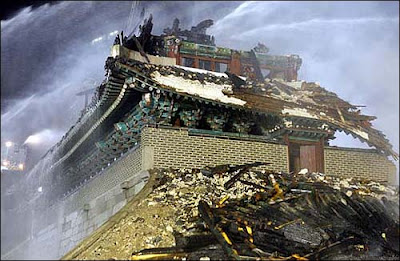 Rubble: The Namdaemun destroyed by fire

Located in the heart of Seoul, the historic structure that dates back to the Joseon Kingdom, caught fire at around 8.30pm.

About 30 fire trucks and 90 fire fighters were dispatched to the scene to bring the blaze under control. The firemen only stopped work at 10.30pm, but the fire flared up again a few minutes later, spreading quickly beyond control. Fire ate through the structure’s roof, causing it to collapse.

There were no casualties.

A taxi driver (identified only as Lee), who was waiting for customers nearby, told police that he saw a man in his 50s walking up the stairs of the gate with a shopping bag. He then saw a spark like a firework and the man coming down the stairs.

Lee reported the incident to the police and drove around the area to look for the man but could not find him. 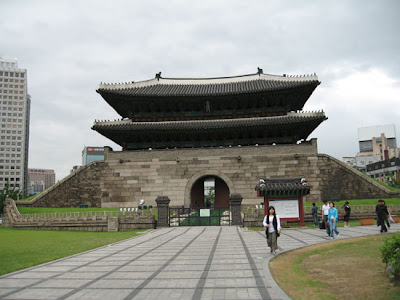 Standing tall: A look at the South Gate in the day 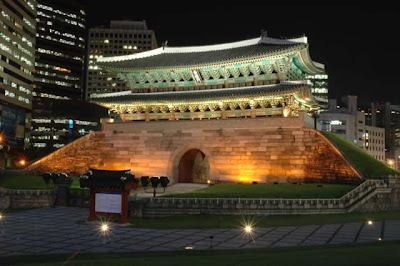 Majestic: A night view of Namdaemun

Namdaemun is the oldest wooden structure in Seoul. It was originally built in 1398 and then renovated in 1962 following its destruction during the Korean War. It was given the status of National Treasure No. 1.