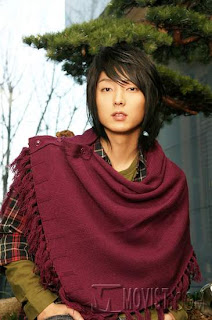 It’s about time we profiled the pretty boy (yes, don’t let the picture throw you off. It’s a he!). The model-turned-actor is a martial arts enthusiast whose first TV appearance was back in 2001. It was in a commercial for the fashion label So Basic.

He then landed minor roles in various dramas in the following years, but hit it big when he was aptly cast as an effeminate entertainer in the period flick The King and the Clown (2005).

Set in the 15th century, Lee plays Gong-gil, an entertainer forced to satisfy the sexual and emotional cravings of King Yeonsan. The film became one of the highest-grossing locally-made flicks in South Korea.

After getting noticed, the 26-year-old appeared in a supporting role for the Lee Da-hae and Lee Dong-wook drama, My Girl. His movie, Fly, Daddy, Fly was released in 2006. The following year, the actor toplined the action drama Time Between Dog and Wolf.

Currently, the androgynous actor is trying to expand his influence overseas. He has appeared in a Japanese-Korean joint production, was approached by Chinese director Chen Kaige to make a movie, and inked a contract with Emperor Entertainment Group to aid his endeavours in the Chinese-speaking territories of China, Hong Kong and Taiwan.

In Oct 2007, the Busan native was honoured with the Rising Star Award at the Hawaii International Film Festival.

The latest news on the rising star is that he’s about to launch his career in China through a remake of a very popular Chinese drama series.