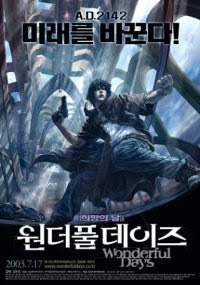 My first animated Korean flick. I rather enjoyed the futuristic sci-fi movie even if I was trying to “grasp the big picture” throughout most of the show. Either the subtitles didn’t do the movie justice or the narration wasn’t clear.

I understand that the film has been released in the US and Britain under the name Sky Blue. Has any of our British or American readers seen the film on the big screen? My copy was the original Korean version with English subtitles.

Ecoban is a self-contained city built by survivors of a civilisation that has been destroyed by war and pollution. As the Earth’s natural resources dwindle and pollution increases, Ecoban creates and continues to feed on pollution. 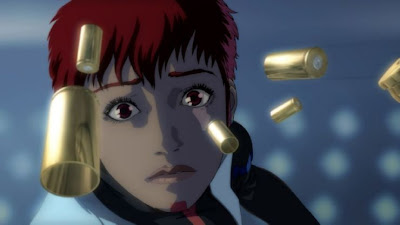 Bullet time: Quick, put on some shades and a cloak and do
that back-bend thingy, Jay!

However, only a selected few are chosen to live in “Zion” leaving many to perish outside the city. That’s where Neo – sorry, I mean Shua, comes in.

Shua is the only man who is determined to clear the skies so everyone can enjoy fresh air and sunshine once again. Actually, it’s also a promise to the woman he loves.

Uh-huh, a love story is the main thrust of the movie. Of course, since Shua is one of the outcasts, his lady love would have to be someone from Ecoban, a high-ranking security officer named Jay. 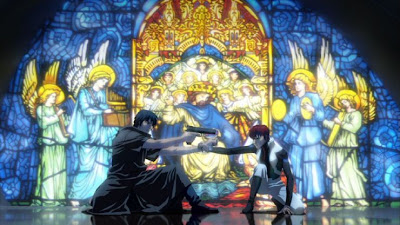 Point blank: How can we be lovers if we can’t be friends?
Shua (left) and Jay face-off.

There’s a little bit of a love triangle between Shua, Jay and the Chief of Security as well. Apart from that, there’s the struggle between the high and mighty Ecoban-ians and the Marrians (those who are outside the city).

As for the technical aspect of the movie, I think it is perfect for the show. At least I wasn’t cringing at the CGI effects like when I was watching D-War.

Set in AD 2142, a perpetually gloomy, rainy and polluted land is created by Man to fuel the unpolluted city of Ecoban. 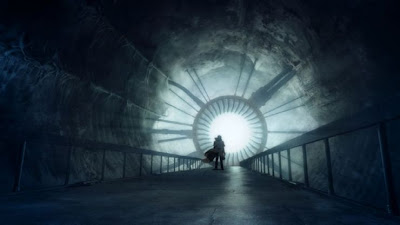 Those outside the city, the Marrians, work for the Ecoban-ians. However, one Marrian’s determination to see a glimpse of sunshine and blue sky drives him to infiltrate the supposedly impenetrable fortress of a city. While there, he goes face-to-face with his old flame, Jay.

Will she rat out on him or will they mend their relationship and…save the day?

Please buy the DVD. Yes, this one’s from my friend’s stash as well.

One of the extra features in the DVD was this MV from the movie’s OST. It is sung by Yi Sung-yol and the title of the song is 비상 (Bi-sang = Fly High). I think it’s a beautiful number; Yi Sung-yol’s haunting vocals has been likened to U2’s frontman Bono. If he sounds familiar to you, it’s because he also sang Be My Lover for the highly-popular K-drama My Lovely Sam-soon.

Don’t just take my word for it. Watch snippets from the movie and listen to the song now!