Orchid and Liz got all hot and bothered in an enclosed room with the F.T.Island boys this morning.

Oh, get your mind out of the gutter, it wasn’t a pleasant experience at all. The extremely flawed organisation of F.TIsland’s press conference in Kuala Lumpur, Malaysia left many disappointed. (We really hope the concert this Sunday turns out well).

The press arrived at the appointed time of 10.30am on March 28 at Izzi Restaurant, Bukit Bintang for registration. We were notified that the F.T.Island boys would appear at 11.30am. Sweet. 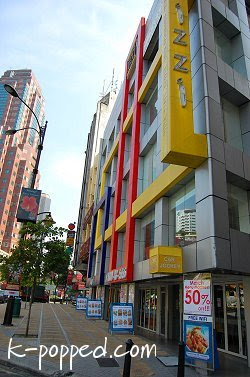 The venue: Izzi Restaurant has a conference area
on the 3rd floor. The air-cons are faulty, though.

Unfortunately at 11am, the air-conditioners in the room – which by that time was filled with about 100 people – died on all of us.

No joke. The air gradually filled with CO2 and everyone started to suffocate. We were all “treated” to a sauna that we didn’t sign up for.

One hour later, at 12pm, still no F.T.Island. Worse still, the sauna became unbearable. It turned into an oven and everyone was gradually roasting their kidneys away in the stifling heat.

Some mainstream reporters and photogs were livid (time is of essence to these people as they’ll have to rush off for another assignment – work is work, no?) and jokingly suggested that the press should just boycott the event.

I got a little light-headed and had to step out onto an adjoining balcony for much-needed fresh air. Before dashing out of the room and gulping in the rather polluted air of Kuala Lumpur, I took a peek at Orchid, my trusty photog for the day, who had turned red in the face because of the heat. 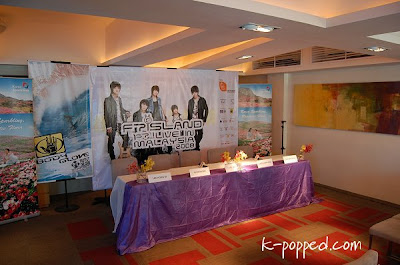 FT Island in Malaysia!: The set up before the five boys appeared
before the press

At 12.20pm, after almost 2 hours since registering and 1.5 hours in the oven, the English translator appeared and announced that there was a technical glitch and we had to wait somemore. Hot (literally) damn!

With nothing to do but slowly die in the enclosure, everyone started fanning themselves while straining their necks to find out what the heck the organisers were up to. The organisers seemed all flustered and bothered…the heat (and much more, I bet) got to them too.

At 12.27pm sharp (yeah, I took note of the time – a TWO hour wait, I could’ve watched a movie with that amount of time), the Five Treasure Island boys appeared, looking all dashing and cute. Poor guys, they must have felt the heat too. Lead vocalist Hong-gi didn’t look very happy.

And after all that, guess what? The microphones didn’t work properly during the press conference and the sound system sucked…technical glitch? You don’t say! 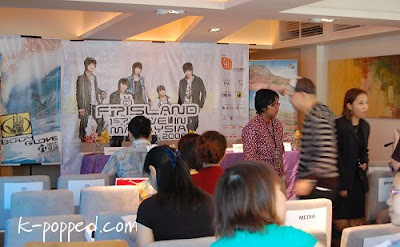 The sauna/ oven: This conference area turned into an oven after the
air-cons stopped working. Everyone was perspiring.

What was supposed to be an hour with the press turned into a 15-minute session because everyone – including the F.T.Island boys – was being mercilessly roasted in the oven.

Oh, and here’s the best part: the MC of the day – who by the way was pissed with the whole situation as well – didn’t open up the Q&A session to the floor.

Yup, he asked all the questions (some were repetitive) and the press at large was not given a chance to present our questions to F.T.Island!

What kind of a press conference was that? C.I. Entertainment seriously needs to have an internal post-mortem meeting after the dust has settled.

First-time organising flaws aside, K-popped! still has some juicy F.T.Island insights to share with all of you. Yay!

Look out for our exclusive take on the F.T.Island press conference in Kuala Lumpur, Malaysia soon…very, very soon. 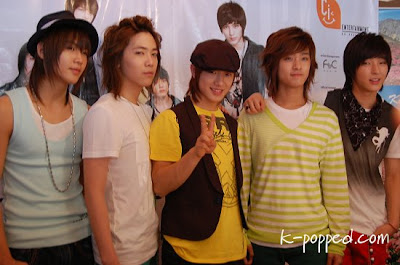