She was a housewife. She lost weight through exercise, toned herself up real nice and became known for her expertise on physical training and exercise. 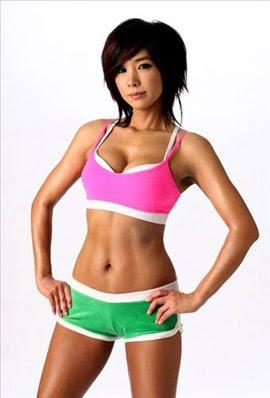 Jung Da-yeon, the lady who turned herself into a sizzling hot chick, has now bagged a role in a K-drama because of her success in whipping herself into shape. The sexy lady is set to play a fitness trainer (what else?) in the TV series Aquarius, which will be aired mid-April (in Korea).

The morning drama is targeted at housewives. Director Kim Soo-ryong personally approached Jung to be in his drama.

He explained: “Jung Da-yeon and her husband live in Ilsan close to where I live. I asked her, as a friend, to be in this drama because I thought her exercise expertise would be an incentive for health-conscious housewives to watch our program.”

He also wants Jung to “provide useful information about exercise and nutrition through the role of her character.”

Wow, look at those killer abs!