Yesterday, we brought you news that Uglydolls is actually K-popped! Today, Rooster scores an exclusive interview with creator David Horvath, who candidly talks about Choco-pie, UFOs and (of course) Uglydolls.

When I received a reply from Uglydolls creator, David Horvath, agreeing to an e-mail interview with us, I was – in a sense – starstruck.

Well what can I say, as a lover of all things cartoony and cute, this is what happens – I ended up sending 4 e-mails because my buttery fingers couldn’t get the simple address right; 2 lost in cyberspace and clogging up some poor soul’s inbox, before David received my questions. Sigh.

Uglytown is where the fun’s at!

Anyway, without further delay, let me introduce to you K-popped!‘s 1stexclusive interviewee, David Horvath of Uglydolls.

Why Uglydoll? How did this name come about?

David:Since Sun-Min and I met, we wanted to redefine the word “Ugly” by telling stories through books and toys. To us, Ugly means unique. We should celebrate the things which make us different and which make us who we are.

The little twists and turns on our outside AND inside are to be embraced, not hidden or changed to fit some bizarre set of standards set by other people.

During one of our toy design discussions many years ago, Sun-Min said “I want to make an Uglydoll”. I suggested that we call the doll she had just made from one of my drawings by that name, and things started from that moment on. 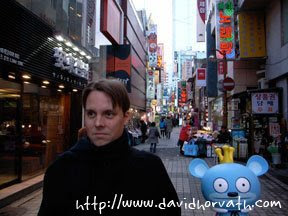 Each Uglydoll is unique in design and has its own story to tell. What’s your design process in creating an Uglydoll?

David: Each Uglydoll comes about in a different way. I created Wedgehead when I was a small child trying to catch a toy store employee in a lie. ( I would call and ask if they sold “Wedgehead” after being told 100 times that they had toys in stock which they never had…they would say “YES, we have Wedgehead, come on down!”).

In general we start with the character…who they are…what they do…what they love or dislike…then we go from art to doll.

David:There’s no “Earth” in the Uglyverse, so most have never tried Korean food, but the few who have crossed over into our own human universe love it. Especially BBQ and Choco-pie.

David and Sun-min, do either of you have a favorite Uglydoll?
David: Our favorites seem to be the newest ones we’re working on, but we have a strong connection to Wage of course.

Years ago, when Sun-Min had to move back to Korea, I sent her many letters with Wage drawn at the bottom and she decided to sew him into a doll as a gift for me. That’s how this all started.

Which Uglydoll do each of you share traits with?

David:Sun-Min says we are secretly OX and Wegdehead but I am not sure why?!

What new Uglydoll are you working on right now and what is his/her/its character like?

David:Top secret! But we’ll be able to tell you February 2009. We sometimes hide the new Uglydolls in our Uglydoll books.

Will the Uglydolls star in their own animated series someday?
David: We have an entire series of Uglydoll books coming out very soon. On April 22nd, the first two Ugly Guide books will be released with about 4 story books coming out each year after that.

The Ugly Guide #3 (the Ugly Guide to being alive and staying that way) is shipping early 2009 and #4 soon after. We love books and are pretty happy working in that medium for now. 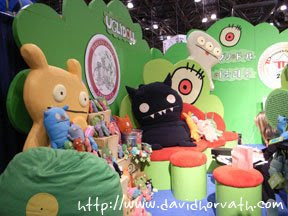 David, you blogged that 99% articles written about Sun-min and you are a little off. Would you like to get rid of that 1% by telling us what they misquoted you on and what the truth is?
David: It doesn’t bother us too much but can get funny sometimes. We never give anyone sales figures, for example.
Well, magazine and newspaper reporters hate this. So sometimes writers or reporters will “misunderstand” one figure given to them for another.

Sometimes they get little details wrong, such as where we live or where we went to school, or if there’s really UFOs.

Where can our readers get their very own Uglydoll if they’re living outside the U.S. or South Korea?

David: If Uglys aren’t anywhere to be found in your country yet, we will be soon! Uglydolls are now spreading around most of Asia and should show up in greater numbers.

If you find a special shop in your area where you wish you could find Uglys, ask the store owners to give us a call or write to us, and we’ll send some their way.

Oh and uglydolls.comhas a store locator!

And lastly, does Uglyworm know how long it takes before ice-cream goes bad?

Thank you David!Folks, how about a visit to Uglytown to meet these Ugly little critters? Hit this link! Uglydoll Official Website

Related:
Of romance and Uglydolls