The Energizer Bunny and his gang launch into a dance battle with a team of B-Boys who kick their @s$e$…but wait, we’re talking about Rain here. Things wouldn’t be complete if he doesn’t bounce back – better than before. 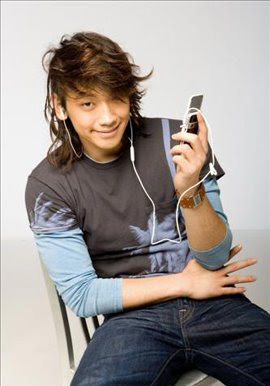 Close: Me and my Samsung

That’s the premise of Rain‘s brand new Samsung Anycall music video, which is about working hard to achieve one’s dream — Any Dream. The MV will be edited into a 15-second commercial clip to be aired in conjunction with the 2008 Beijing Olympics!

Currently, there are two versions of the MV at YouTube – the full version (8:26) and short version (4:24). As a Rain fan, I found the full version a little too long and boring, the song’s so-so and isn’t memorable.

The fun bits, which are available in the short version as well (above), is when the defeated Rain forms a new dance group…and the people who sign up are dancers wannabe from various backgrounds – a chef & a wage earner – to name a few.

However, under the tutelage of Rain and the talent of the only girl in the group, who also happens to be a gymnast, the motley crew may have a fighting chance at winning the upcoming dance-off. Whoo-hoo.

The Samsung phone plays a vital part in the formation of the group as the Energizer Bunny uses it to capture pictures of his dance members, use it show his team new dance moves as well as to play music from the phone.

Bah, words, words, words…please watch the video, which is directed by Jang Jae-hyuk (helmer of It’s Raining MV), and tell me what you think of it?

The edited 15-second clip will go on air nationwide in China and Hong Kong in April. Once Bi wraps up Ninja Assassin (which we think is Ninja Scroll, hee hee), he will visit China in mid-August to take part in Olympic-related events.