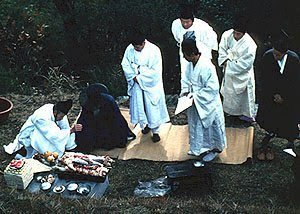 Today Koreans celebrate Hansik (한식), a traditional holiday deeply rooted in Chinese legend. On this day, families visit their ancestral tombs for a little ‘spring cleaning’ by planting trees alongside graves and adding fresh turf. Most farmers begin sewing their rice fields on Hansik as well. In essence, Hansik is a day of new light and renewal.

Though not commonly practiced nowadays, Hansik is also a day to eat foods not cooked over a fire, hence the other term for this holiday, Cold Food Day.

It is said, towards the end of the Chou Dynasty (1050 – 256BC) in China lived Jie Zi Zhui, a man who served a young noble, Ji Zhong’er, the eldest son of Duke Xian of the Jin State. Zhong’er was falsely accused of rebellion by one of the Duke’s concubines as she wanted her own son to be named heir.

One night, Jie Zi Zhui helped Zhong’er escape. Exiled in the wilderness, Zi Zhui did his best to care for Zhong’er, even by cooking a piece of flesh from his own leg for his Master to eat when they were on the verge of starvation.

In time, the concubine that wrongly accused Zhong’er passed on and the Duke’s soldiers were sent out to escort his son home. Soon, Zhong’er became the ruler of a small principality. He invited his faithful friend to join him in office but Zi Zhui declined his invitation as he preferred the simple and humble life with his mother in the mountains.

Believing that he could force Zi Zhui to join him, Zhong’er set the forests on the mountain afire thinking it would bring him out of hiding, but Zi Zhui never came out. When the fires died down, Zhong’er’s soldiers found Zi Zhui’s and his mother’s charred remains beneath a willow tree with a note written in blood on the ground, “I cut off my flesh as a dedication to wish that you, my king, will always be clear and bright.”

Zhong’er realised his foolish mistake and was extremely saddened by his own actions. To commemorate his wise and loyal friend, Zhong’er prohibited fire in every household on the anniversary of Ji Zi Zhui’s death.

Here in Malaysia we also celebrate this day to honour this legend and our ancestors. It is known as Cheng Beng (in Hokkien) or Qing Ming (in Mandarin). It is a day where the souls of our ancestors return to the land of the living to visit their families. In a way, it is similar to the Mexican Dia De Los Muertos (thanks kpop-rubba!) holiday.

Many Chinese families visit their ancestral tombs with offerings, prayers and burn spirit money. Some burn paper replicas of luxurious items such as footwear, clothes and even cars, at the headstone of a deceased family member so that they will receive these gifts in the spirit world.

I came across this website in China where you can pay your respects to your ancestors and famous people online! Hmm, I wonder if they have broadband on the other side? 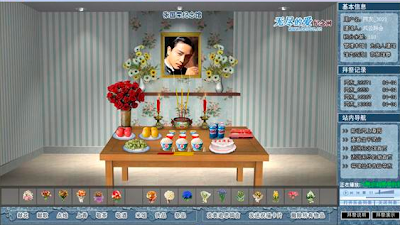 How do you celebrate All Souls Day where you live?