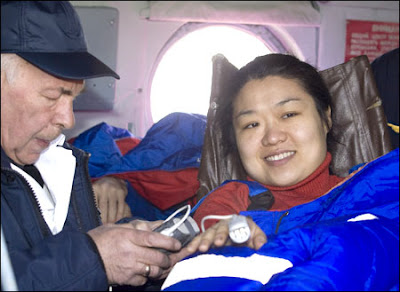 Medical test: A check to see whether Korea’s first astronaut is alright

In a rather rough landing, Yi So-yeon – South Korea’s first astronaut – returned to earth on the evening of April 19th.

The Russian space capsule carrying Yi and two other spacemen – Peggy Whitson of the US and Yuri Malenchenko of Russia – landed about 420km (260miles) off course in Kazakhstan. However, the 3 member crew was safe.

While waiting to be airlifted from the Kazakhstan steppe where they landed, Yi told SBS TV, “There was a shock during landing, and I’m having trouble with my sense of direction.”

She was also so exhausted that she could not walk by herself.

Twenty nine-year-old Yi, who is currently in a hospital in Moscow, will be undergoing various medical check-ups for about a week before returning to South Korea on April 28.