Director Kim Jee-woon’s (A Tale of Two Sisters) kimchi spaghetti Western was invited to the 61st International Cannes Film Festival for a screening under the Out of Competition category. 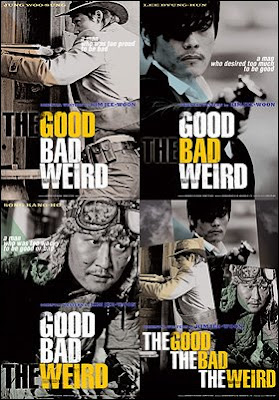 Helmer Kim said: “I think the invitation of my movie proves that Cannes recognises the new experiments being made in Korean commercial cinema.” 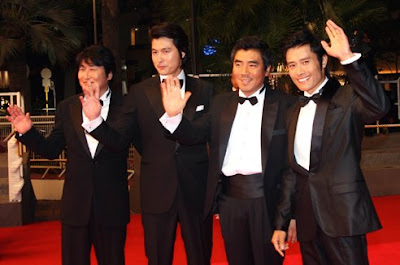 The one-of-its-kind flick was apparently well-received at the festival, which ran from May 14 to May 25.

The movie’s distribution rights for the United Kingdom has been reportedly snapped up by Mel Gibson’s Icon Entertainment International. No buyers from the US yet.

Set in the Manchurian desert during the 1930s, the film is about three characters: The Good (Jung Woo-sung), The Bad (Lee Byung-hun) and The Weird (Song Kang-ho) who are in hot pursuit of each other because of a map.

The Weird starts it all by stealing the map from a Japanese official, The Bad is hired to get it back, while The Good is a bounty hunter who is tracking both of them down! 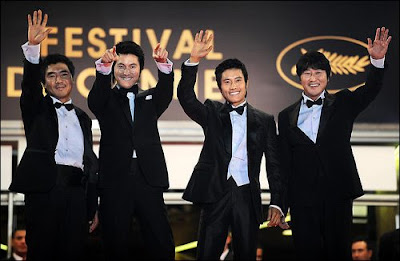 Happy mood: The guys celebrate at the screening
of their movie at Cannes

The stars of the flick joined Director Kim on the red carpet at Cannes on May 24 for the screening. The film looks kinda fun. Check out the trailer below (with English subs)…I wanna watch it! 🙂

Related:
What’s up with The Good, The Bad and The Weird?