The Korean superstar is set to release his fifth album in October 2008 and we are glad to report that it’s catered for the Asian market. Whoo hoo!

The first Korean single off the album will have versions in English, Chinese and Japanese. 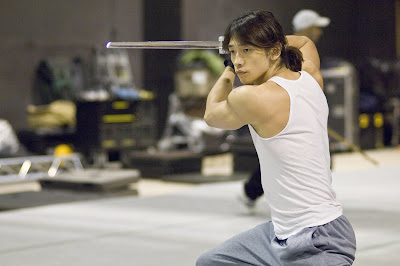 Intense: Bi trains for his fighting scenes in Ninja Assassin in Berlin

After many years of churning out smash hits such as Bad Guy, Running Away from the Sun, I Do and I’m Coming with his mentor Park Jin-young, all eyes are now on Rain in his latest endeavour since he will be producing his own songs in the upcoming album.

A rep from J. Tune Ent said: “Rain wants to make more new attempts in this new album, therefore he has been holding the post of a producer.

“In this new album Rain will invite well-known composers to collaborate together. Rain himself will be most familiar with his own style, so he will create everything on his own–from the songs of the album to the accompanying on-stage dance choreography.”

All the best, Rain. I think you’ll need it. We’ve actually heard a track composed by the Energizer Bunny – the unimpressive Any Dream, which is Samsung Anycall’s Beijing Olympics theme song.

The track lacked a hook that makes the song memorable. 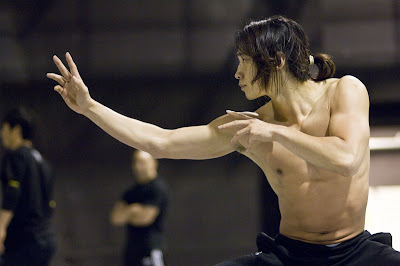 Apart from that, Bi’s recording for Dreamworks’ animated movie Kung Fu Panda will only be for the Asian release of the flick. For the US release, the studio went with Cee-Lo Green and actor Jack Black’s version, which has more punch to it.

It’s rather unfortunate that Rain’s version of Kung Fu Fighting is weak and the vocals are mostly hidden behind the music, unlike his past Korean smash hits, which wonderfully displayed his deep and sexy voice. I guess he’s still not familiar with the English language.

Don’t believe us? Check out Rain’s Kung Fu Fighting below: