If you don’t already know, Arirang TV’s popular music program Pops in Seoul is heading to Manila, the Philippines in celebration of its 1,000th episode.

In our earlier reports, we stated that Min Kyung-hoon of rock band Buzz will be the guest singer at the event. That’s not the case anymore. 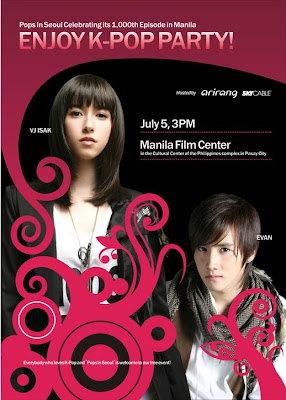 Coming (to the Philippines) soon: VJ Isak and Evan
will be receiving some pinoy love

The update we received announces that Evan a.k.a Yoo Ho-suk, who is formerly of Click B, will be replacing Min.

Both VJ Isak and Evan will appear at the Manila Film Center at 3pm on July 5. Admission is FREE.