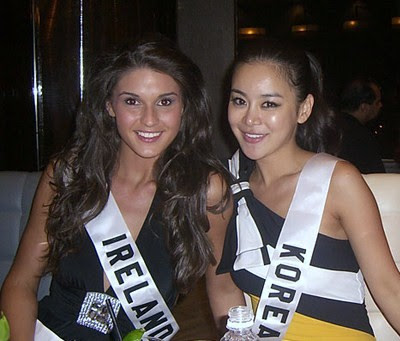 Miss Korea Universe Sun Lee has been super busy since arriving in Vietnam.

So far, the 25-year-old — along with the rest of the 2008 Miss Universe delegates — visited a children’s village in Hanoi, enjoyed the beauty of Ha Long Bay and paraded down the streets of Nha Trang. 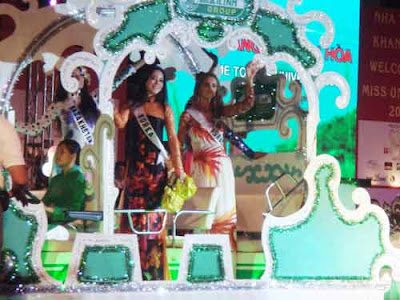 Parade: Rather blurry photo of Sun during the June 30 parade

The beauties are currently all settled at the Diamond Bay Resort, a spanking new hotel in Nha Trang. The hotel’s so new that some sections are still under construction! The ladies will be staying put until the Miss Universe 2008 showdown, which will be held at the Crown Convention Center on July 14.

But before that, here are some tid bits on Sun Lee’s activities as she vies for the Miss Universe title and diamante tiara. 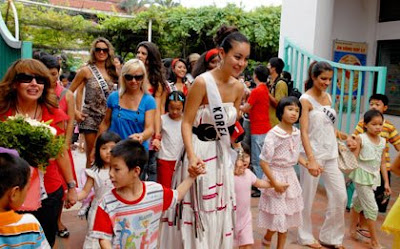 Happy children: Sun puts a smile on the ‘lil ones’ faces

It was a hot day when some of the beauty delegates visited the children’s village on June 27. An eyewitness said that Sun Lee, who was wearing an ankle-length dress, started dancing the with the children and fluffed her dress to make cool air for them. Ha ha, so cute.

Remember that samurai sword Sun danced with during the National Costume parade? Well, it was auctioned off during a charity gala on June 28 in Ha Long Bay. 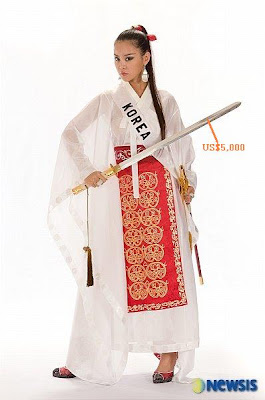 For charity: Proceeds from the sale of the
sword go to charity

Sun told her coach Ines Ligron that her sword was sold for US$5,000 (RM16,331). Oh yeah, and the crowd shouted for Sun to give the sword one last twirl before parting with it ;-).

The highest bid for the night was Miss Belgium’s Swarovski-encrusted jewelry, which fetched US$15,000 (RM48,991)! Proceeds from the auction go to the Nguyen Thai Binh Scholarship fund for disadvantaged students.

Sun Lee and the gang arrived in Nha Trang at 3pm on June 29. They were then ushered onto buses that carried them to the Diamond Bay Resort. 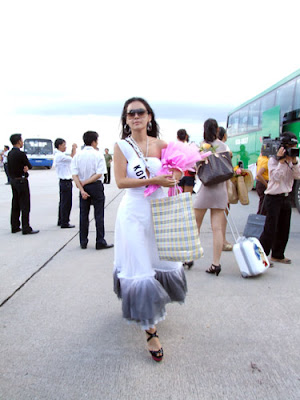 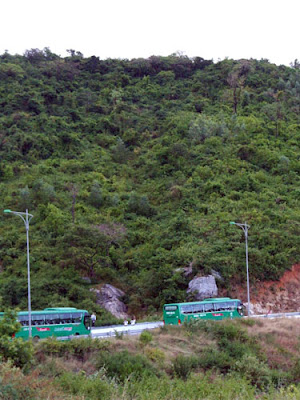 Transportation: The buses that ferried the beauties
to their hotel from the airport

Coming up next: The beauty delegates will be in a swimsuit fashion show/ competition on July 2. The winner will walk away with US$2,000. K-popped! will try to keep you updated :-).