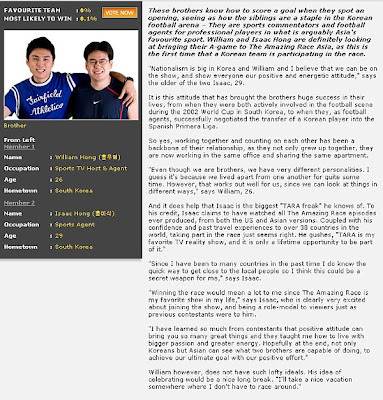 The brothers are sports commentators and football agents for professional players. They are working in the same office and even share the same apartment. Issac at 29, is the elder of the two. William is 26.

What about Malaysia this season? We have two teams – TV host/actress Bernie Chan and her elder brother Henry Chan, and actress Ida Nerina and her friend Tania Khan.

Fans of the show can tune in for the special Racers Revealed episode on Sept 4 (Astro Channel 701) at 9pm. The reality travel competition series starts airing on Sept 11 at 9pm.