As promised, here is a brief Q & A with Korean-American author Nami Mun on her debut novel Miles from Nowhere.

The title will be released in the United States on Boxing Day (Dec 26) and in the UK in early 2009. Malaysians, as of writing this, there are no plans to bring the book here.

Mun was born and raised in South Korea and later, the Bronx, New York. She has been working since the 7th grade, taking on various jobs such as street vendor, photojournalist, bartender, activities coordinator for a nursing home and criminal investigator. 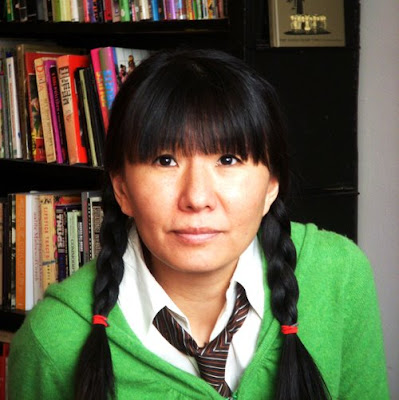 Nami Mun is a Jill of all trades


Mun, who is currently a lecturer at the University of Michigan, is also a Pushcart Prize winner (an American literary prize by Pushcart Press that honours the best in “poetry, short fiction, essays or literary whatnot”). She now talks about her first novel in this interview provided by Penguin Group, USA.

Your novel has many autobiographical elements. Like Joon your main character, you’re a Korean-American from New York City who was a teenage runaway, a dance hostess, and an Avon Lady who sold cosmetics door to door. Joon is also at times a drug addict, a sex worker, and a petty criminal. How closely is Joon’s story based on your own?

Not very. If I had to put it in numbers, I’d say maybe 1% of the book is autobiographical. Yes, I left home at a young age but I chose not to write about the actual events of my own life as a runaway. I kept those actual events in a “reserve” of sorts and used my knowledge of them to strengthen the narrative artifice I was creating.

Take the chapter Avon for example, I once had a job selling jewelry out of a briefcase door to door. I think I was maybe 14 or 15 then. I would walk down streets and enter businesses and do my best to get someone, anyone, to buy a gold necklace or what have you from me.

One place I went into was a Chinese restaurant. It was completely empty of customers, so I walked to the back, into the kitchen, and mimed and gestured my sales pitch to a staff of Chinese men who spoke little English. I held a necklace out for them to see. One of them took it from my hand, looked at it closely, and without much warning, tossed it into a sizzling wok. I was stunned.

The man said to me, “Fake? Turn green,” again and again, while stir-frying the necklace. They all stood around the stove and watched the oil bubble. After about a minute or so, the man plucked the necklace out, studied it again, and said words to his co-workers, who nodded in agreement. Luckily, for me, it didn’t turn green.

I’m pretty sure it was my one and only sale, but when that man paid me money, I remember feeling proud of myself for having rolled with the punches—for having kept my cool about the stir-frying thing.

That was a really good day, and that moment has stayed near me for decades. But I didn’t write about it in the book. Instead I contained the moment and wrote completely fictional events and dialogue to better explore and express just how complex a feeling like pride and hope can be for someone who’s on the verge hopelessness as Joon is in Avon.

After completing your undergraduate studies at University of California at Berkeley, you, decided to work as criminal investigator at the age of 30. How did you find yourself in that line of work?

An acquaintance recommended me the position. I loved that job almost immediately. I can’t say why exactly except that it scratched a certain itch inside my brain. On an average day, I got to interact with diverse groups of people: dealers, gang members, sheriffs, attorneys, heroin addicts, store owners, inmates, barbers, etc. and I got to hear all of their voices.

I loved tracking down witnesses and conducting interviews in unusual locations. I loved getting bits of information about people and trying to create portraits from them, or gathering fractured eyewitness accounts of an incident and attempting to envision a fuller picture. And I loved reading all the documents (police reports, medical examiner’s report, witness statements, etc.), analyzing the evidence, and re-envisioning all that went down before, during, and after the criminal incident.

Come to think of it, what I loved about investigations isn’t so different from what I love about writing, which is to close the eyes and clearly see scenes with dialogue, action, and setting that might reveal something much deeper about the people at stake.

Was becoming a writer a lifelong ambition for you?

No, writing has not been a life-long ambition, but I can say that, for as long as I can remember, I’ve always had an intense desire to connect with people. That’s what writing and reading is, for me—a chance to quietly, secretly share a moment with someone. I didn’t start writing seriously until 2000, when I began this book, but I learned about the power of writing some years ago.

During my runaway years, I kept a journal. I’d write down the events of that day, mostly while riding the subways. At some point in my late teens, when I began trying to live a “normal” life (a real job, a real home, etc.) I decided to destroy all of the journals.

To put it succinctly, I didn’t want anyone to know my past. Including me, perhaps. Decades later, when I started this book, I regretted having destroyed my journals, but truthfully, I think not having a factual record of my past is what compelled me, maybe even forced me, to recreate it as fiction.

Why did you choose Miles from Nowhere for a title? 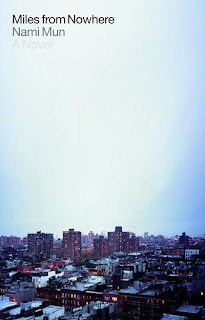 A writer friend of mine told me, after having read one of my stories, that she had no idea that kids from New York could simply run away to another borough and never be found. I thought about this – how runaways could exist in New York and yet not exist. How they could be so close to their homes, geographically, and yet be so far removed. How New York is a city of Everything, and yet you can get lost within it and feel as though you’re living in complete desolation. So there’s Joon: so close to home and surrounded by everything, and yet she’s completely lost and miles from where she needs to be. The title’s also a song by Cat Stevens, whom I quote in the book.

Who are your favorite authors and which writers inspire you?

Recently my creative writing students asked me to give them a top-ten list of my favorite books. I can’t seem to narrow it down to any fewer than 67. If that doesn’t prove my inability to pick favorites, I don’t know what does. But…here is just a sample of writers I admire, in no particular order: Hemingway, Kafka, Chekhov, Bowles, Flaubert, Melville, Nathanael West, Hubert Selby Jr., Robert Stone, Lydia Davis, Denis Johnson, Jayne Anne Phillips, James Ellroy, Richard Price, William T. Vollmann…

At the end of the novel, Joon feels not grief but guilt over her relationship with her mother. Would you say that this guilt is a dominant theme in your work?

Guilt is the policeman of emotions. If it arrests you, even for a second, you know you did something wrong, and it’s just a matter of time before you have to deal with the consequences. It’s a powerful emotion. And I think it’s an Achilles’ heel for many people, especially Koreans. (We try to avoid it as much as possible even as it surrounds us whole.)

I also think others can make you feel guilty, but only if that seed of guilt already exists. Joon definitely feels guilt for having left behind a mother, and her mother feels guilt for having convinced her husband to move to the States. The father feels guilt, too, but he doesn’t know for what exactly, so he simply throws money in the direction of his church, hoping enough of it will stick for God to notice. Whether guilt is a dominant theme in my book, I’m not sure. But it’s definitely there, breathing between sentences.

What do you want readers to take away from this book?

I want my book to remind readers that the homeless guy holding out his hand and the drug addict nodding off on the bus and the sex worker in the back seat of a car, and even the murderer locked up in prison were all children once. They too experienced things such as first day of school and school cafeteria fights and detention and beautiful long summers. They had parents, some had siblings, and some even had jobs and love and a future.

The homeless guy, the prostitute, the addict, the murderer – these are our brothers, sons and daughters. And these are some of the characters that inhabit my book. I want my readers to love these characters, even if they seem unlovable.

Get your copy of Miles from Nowhere here