Hey, we don’t make these things up. A picture paints a thousand words so check out the pic below! 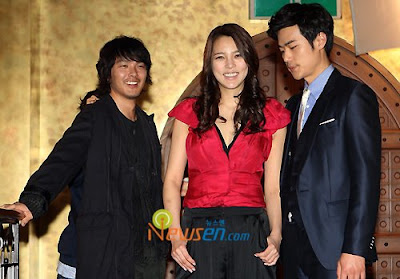 Sneak peek: Kim Kang-woo (right) does something naughty while
Park Shi-yeon smiles for the camera. Park Yong-ha’s (left) happy for
his friend.


Kim Kang-woo (Marine Boy) sneaks a peek at co-star Park Shi-yeon’s boobs while the pair was promoting their latest KBS drama Story of a Man on April 17. Kim and Park were even co-stars in Marine Boy! Well, aren’t they “friendly” ;-).

The drama, which comes on every Monday and Tuesday (in South Korea), also co-stars Park Yong-ha.

The drama revolves around Kim Shin (Park Yong-ha) who once had it all. A scam ruined his life so he goes all out to seek revenge. Park Shi-yeon plays his loyal girlfriend while Kim Kang-woo portrays the baddie.

Story of a Man is on the KBS network so that means we Malaysians will be able to watch this too – whoo hoo!