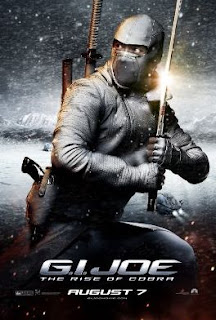 Lee Byung-hun…and the fact that sexy oppa, along with Sienna Miller, makes being a baddie so, so good.

C’mon, how can it NOT be good when a G.I. Joe, who is suited up in an expensive high-tech suit giving him superhuman strength STILL eats the dust of the very human bad guy as they run through Paris? Bwah ha ha ha ha….

The ONLY reason K-popped! rushed to the cinema — weaving in and out of Friday evening rush hour traffic — is because Lee portrays Storm Shadow in G.I. Joe: TRoC. And boy, the 39-year-old Hallyu star sure doesn’t disappoint!

He’s suave, he’s full of charisma and he’s molten lava hawt (and he almost made me go Rain, who?).

Lee Byung-hun easily shifts from being a Hallyuwood star to a Hollywood actor and his trump card is his mastery of the English language.

It’s undeniable that Lee is oh-so comfortable with the language and there isn’t any cringing, trying-too-hard-moments when he flawlessly delivers his lines in the flick.

As the cool as cucumber ninja Storm Shadow, Lee is a smooth criminal – deliciously unfazed and oozing malice. 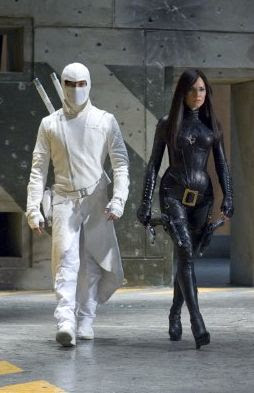 Storm Shadow (left) to Baroness: ‘Yeah, I’m not taking
any chances with the A(H1N1) flu virus around. I
go out protected.’

As for the movie itself…well, let’s just say G.I. Joe: TRoC isn’t action movie gold. It has a very cartoon vibe to it. I can picture 10-year-olds gaping in awe and wonder at the out-of-this-world gadgets and machinery on display in the show.

It’s every little boy’s military fantasy come to life and there’s no big surprise here since the Joes are based on Hasbro’s action figures.

My advice: Don’t take this CGI-laden flick seriously. Especially so when you have an air fight with lines such as: “Bogey at 10 o’clock!”, which is instantly followed by “Oh no, I’m hit, I’m hit!”.

Electrifying: ‘When you said I needed a buzz, I didn’t know you
meant getting fried by lightning!’


Nonetheless, G.I. Joe: TRoC entertains. And for fellow K-popped! friends, the bonus comes in watching one of Hallyuwood’s biggest stars fitting in and doing well in a Hollywood production.


Nanobots and high-tech gadgetry take centre stage as the Joes takes on an evil organisation that is led by a notorious arms dealer.

It has been showing in Malaysian cinemas since Aug 6.