Prev Article Next Article
Words by Liz
Photos by OrchidAre you guys still reeling from the Super Show 2? Even with its flaws, I enjoyed Super Junior’s first ever concert in Malaysia. The stage set up was amazing and if anyone should win an award, it would be the production crew. 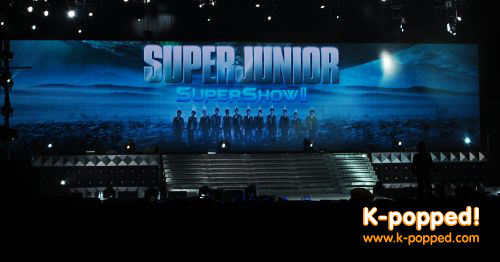 Like, wow: The Super Junior Super Show 2 has a RM6 mil price tag on it


The RM6 mil production wowed the senses and the Putra Indoor Stadium in Bukit Jalil proved (once again) to be the place for a concert. The audio blew me away compared to the lousy sound system at TVXQ’s Merdeka Stadium (open air) concert back in 2007.

During the 3-hour sell-out show, SuJu entertained the crowd with 35 songs, including some covers…as well as their funny / zany antics. 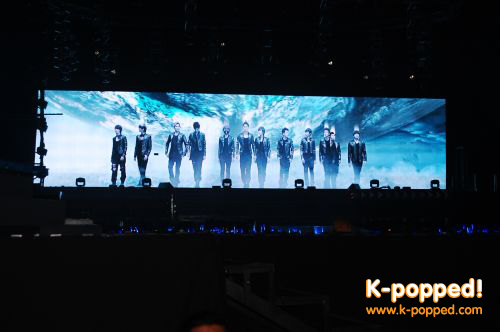 Super Junior: The boys finally made it for a Malaysia concert!


Here’s the lowdown of the Super Show 2 in Malaysia, SuJu’s concert that was watched by 15,000 fans…yes, beating even Rain’s 2007 I’m Coming concert, which was held at the same venue. Back then, Rain performed to 10,000 fans.

Special thanks to Galaxie magazine for giving K-popped! the opportunity to be at the Super Show 2, and of course Marctensia and Red Presents for bringing SuJu to Malaysia!

After the stadium gates opened, it was an hour-long wait before the SuJu boys appeared to fans. Before that, local opening acts Thomas Jack and Iqwal warmed up the already buzzing crowd.

Anticipation hit the roof when RELA officers and ushers formed lines along various exit points of the stadium. Some of the SuJu boys were about to make their grand entrance through the crowd and the screams were deafening. 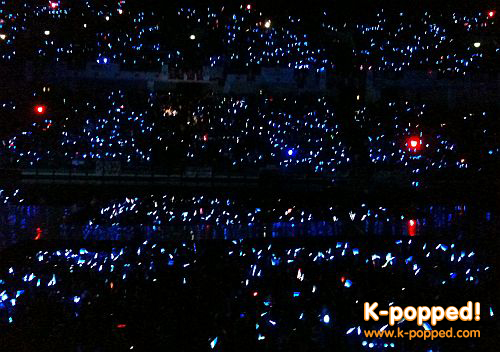 Sea of lights:…but no one’s feelin’ blue that night, I guarantee you that


The lights went down at 8:00pm and the stadium instantly turned into a twinkling sea of blue neon lights – the official colour of Ever Lasting Friends (ELFs or SuJu fans).

With great drama and through trapdoors, the boys magically appeared at strategic locations among the audience and on stage. The crowd went wild. 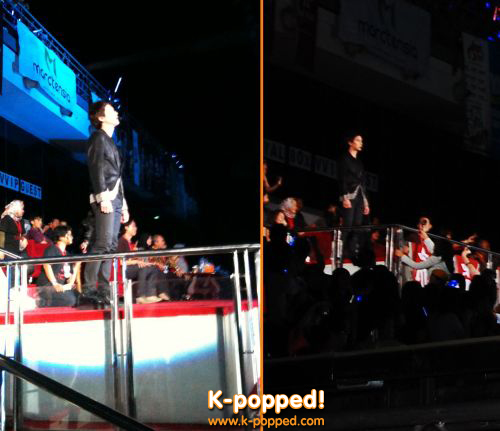 Surprise!: Kyuhyun appears near the Media Bench (left) and as seen from
Orchid’s view (right) 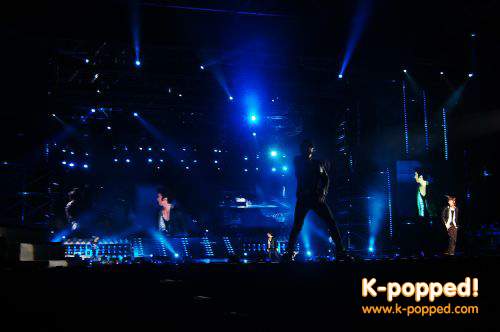 Magical moment: Some of the boys appeared onstage via trapdoors 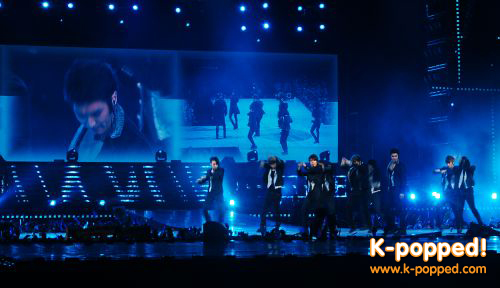 Bringin’ the house down: SuJu rocks it out


SuJu then belted out familiar hits such as Thirsty, U, It’s You, Disco Drive, Miracle and Dancing Out. Some of the SuJu boys also started giving “fan service” i.e. teasing ELFs by acting as if they were taking off their tops.

Before the boys launched into Angela, a video introducing all the 10 members who came to Malaysia was shown. They were introduced like so:

(Three of the boys did not come for the concert, namely Kangin – suspended from all activities because of his DUI accident; Hankyung – in a legal tussle with SM Entertainment & Kibum – inactive as a SuJu member since 2009) 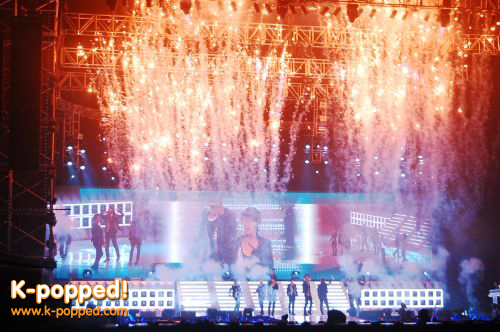 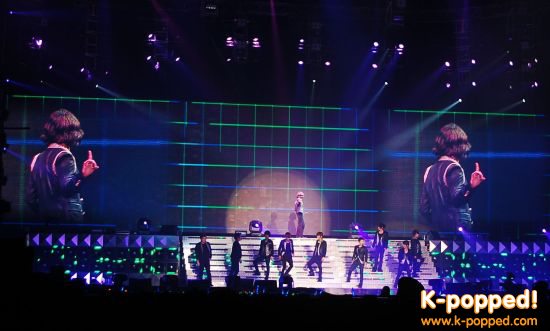 Hangin’: The boys all strike a pose 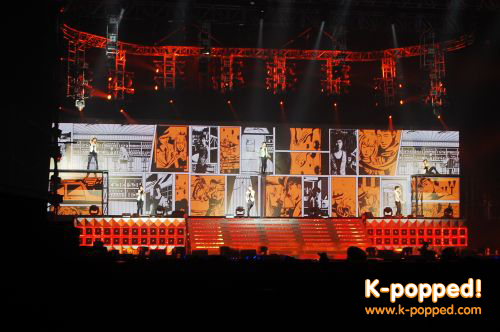 Blending in: Comics coming to life 😉 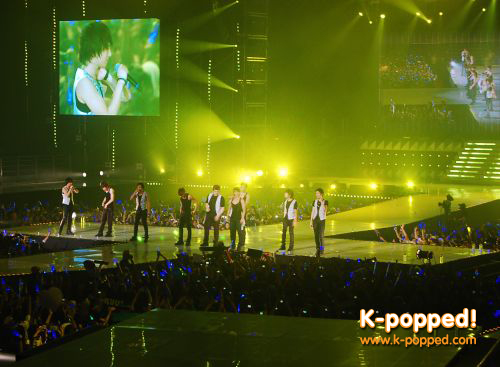 Half an hour into Super Show 2, the momentum slowed a little during the boys’ solo stages. 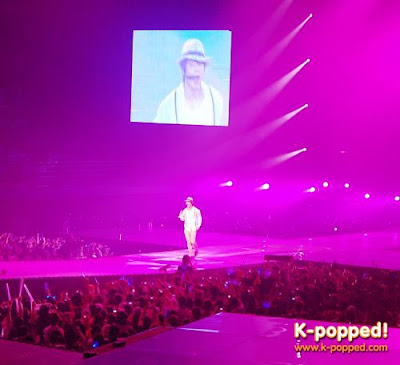 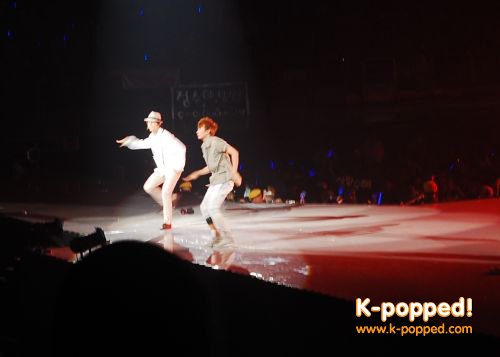 Friend: Eunhyuk (right) breaks it on down with Donghae during the latter’s solo

Personally, Yesung’s Give Up bordered on boring and Ryeowook’s cover of Craig David’s Insomnia lacked punch. Eeteuk’s attempt at Park Jin-young’s Honey paled in comparison to the original by Rain’s mentor. Honey is one sexy song…and Eeteuk didn’t manage to sell the sex ;-). 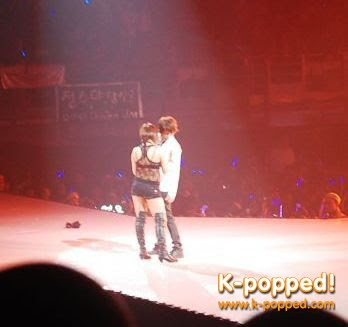 
The violin-playing Henry (of SuJu M, a subunit of SuJu that caters for the Chinese market) accompanied flamboyant Heechul in Sonata Temptation. The effeminate Heechul proved to be one weird puppy as he burst onto the stage in a white suit with lace trimmings. 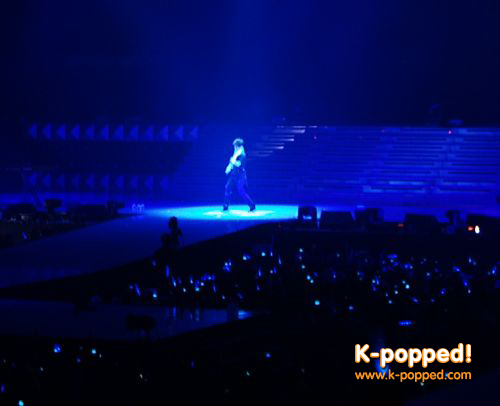 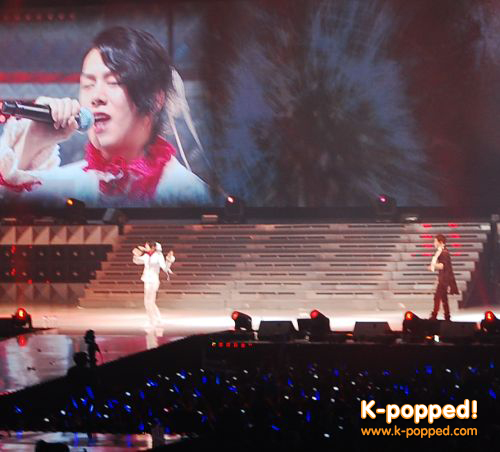 Wacky: Heechul (left) goes all girly as Henry patiently waits until he gets
to play the violin again

While Cinderella’s rock number did nothing for me, Henry of SuJu M definitely caught my attention. That boy sure played one mean violin! And what was that? A back bend while performing? Whoa! Somebody, stop him.

Next, an interesting Super Attack reel showed the boys in a bare-knuckled fight under the pouring rain. Sexy.

The fisticuff interlude led to the SuJu boys’ hit track Don’t Don. At the edgy song’s bridge, Henry appeared once again wielding his violin. He was superb. 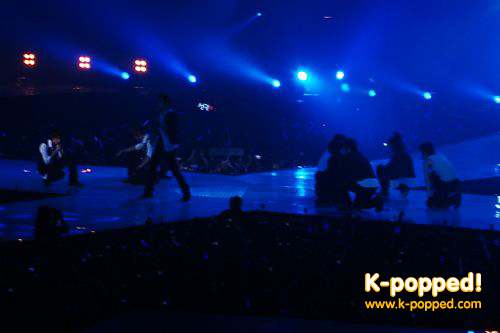 Sharing the stage: The SuJu boys with Henry(the pic’s a little dark, so you
have to imagine it :-P)