Liz K-popped, who was at Super Junior’s Super Show 2 in Malaysia, continues her review on the sell-out concert. The show, which is currently the talk of the town, seems to have breathed new life into the Korean wave (Hallyu) in Malaysia. 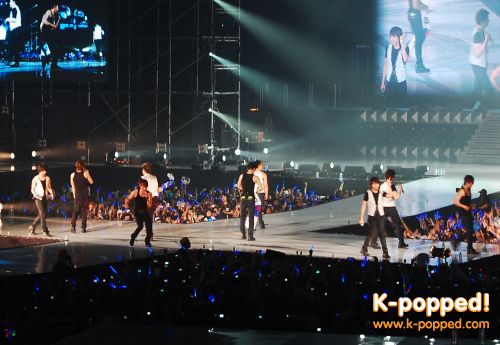 Talk of the town: SuJu’ Super Show 2 has gotten the local press a buzzin’ 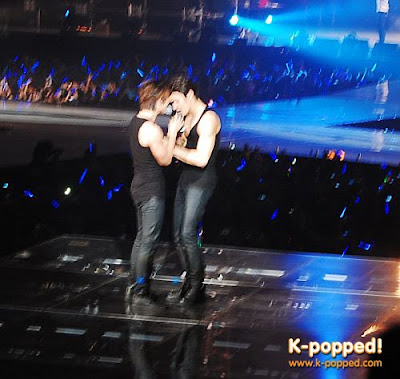 
After singing another one of their faster hits (Twins), Super Junior slowed things down with Our Love. The boys were rather playful during this bit as Sungmin brought out a video cam to record his friends while they sang their parts. Heechul, the diva of the group, pushed Kyuhyun to the side and dominated the stage during the latter’s part. Fans screamed in delight.

Things got weird when the boys covered Peter, Paul and Mary’s Puff the Magic Dragon. 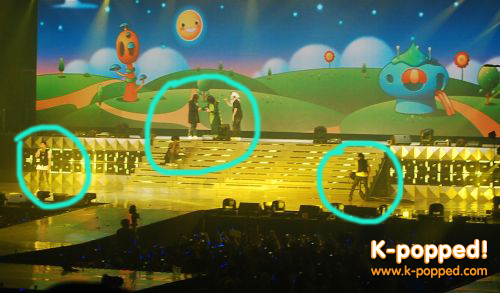 
While poor Kyuhyun (I like this guy, he’s so hardworking…and he’s the youngest of the lot at 22!) sang the kiddie song (pic, far left), the boys, led by Heechul in a green dragon suit, fooled around behind him in large insect / animal costumes (pic, centre). It looked like the boys were in a children’s programme.

Eunhyuk, while wrestling with a snake (pic, right), did the famous Kara butt dance for Mister. The fans, again, went wild.

Next, five of the singers namely Shindong, Eeteuk, Kyuhyun, Donghae and Eunhyuk busted some moves for the dance interval before Henry took centre stage again (minus violin) with his self-composed Sick of Love. 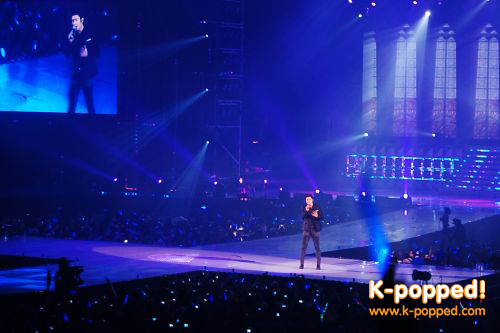 Heartfelt: Siwon is “a flower quickly fading, a wave tossed in the ocean, a vapor in the wind”


Siwon popped out for his solo wearing his faith on his sleeve when he belted out Who Am I (by Casting Crowns). The 23 year old commendably sang in English…but honestly, it was difficult to make out what he was singing, except for the pre-chorus which got me singing along.

Next, ELFs were thrilled when SuJu M, including Zhou Mi, sang their Mandarin songs Blue Tomorrow and Super Girl. 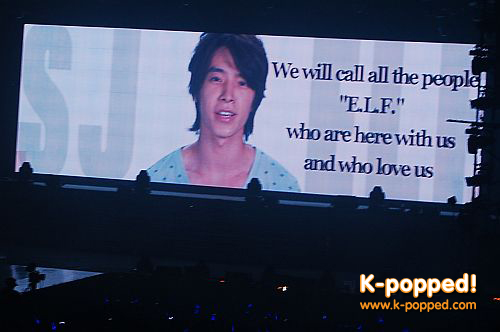 
A sweet moment followed in Shining Star as the boys got to really connect with fans. Sitting on stools at strategic locations all across the stage, the boys serenaded the crowd while soaking in their fans’ love.

What a touching moment, so much so that Eeteuk (the group’s leader) ended up in tears. 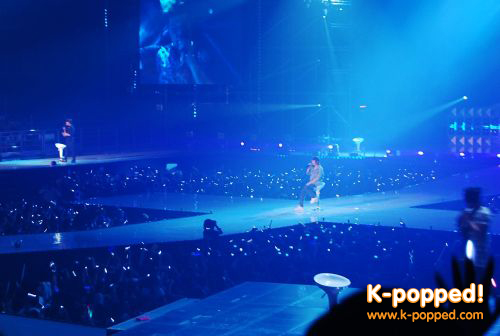 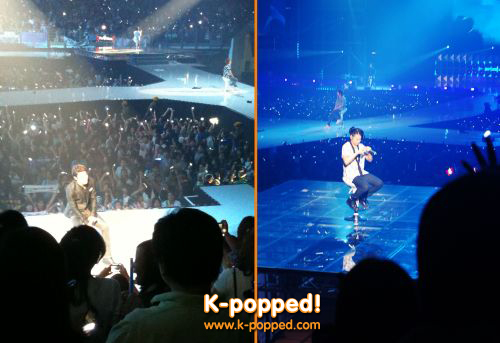 By then, the energy had somewhat fizzled and SuJu didn’t quite nail the song. It was bland. For a kick from that track, I suggest watching the music video. 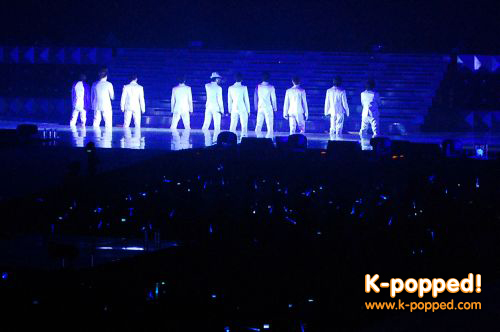 Sorry, Sorry: There was no oomph to the song


Things got weirder when five of the boys dressed up as girls – with Heechul leading the way (of course) – to parody labelmate f(x). They sang Chu. 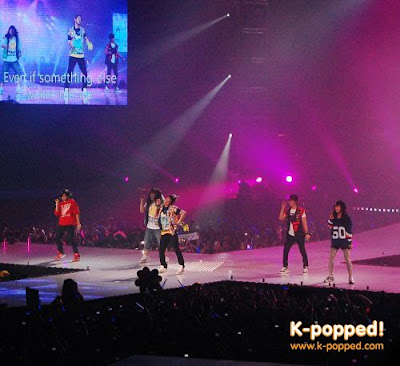 From boys to…girls?: Parodying f(x) and having a
lot of fun with it 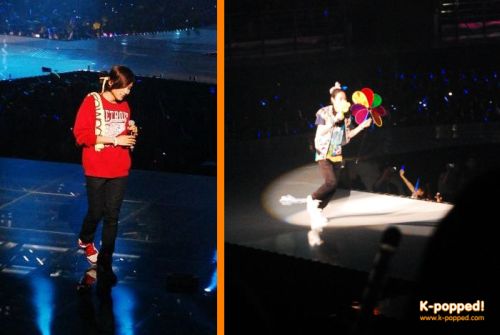 Sweeties take the stage: Ryeowook (left) and Heechul in their feminine get up 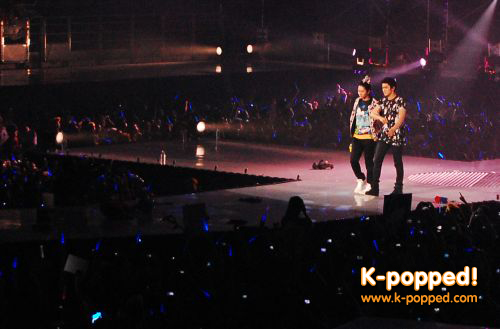 Strut: Heechul (left) and Siwon pretend they are on the catwalk


The show became self-indulgent when the boys seemed more interested in fooling around than performing. It was soon a blur of shoving and prancing around on stage. The concert ended with Pajama Party but SuJu returned for 3 encores.

The encore was a whirlwind of props and costumes as the boys brought out their water guns, fuzzy animal hats and mechanical toys. It officially turned into a super carnival (just like their song, huh?). I glazed over. 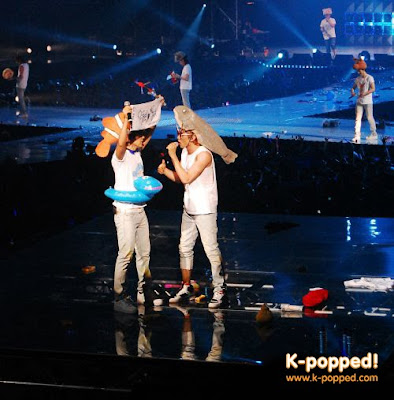 Something fishy: ‘Dude, I found Nemo! He’s on your head.’ 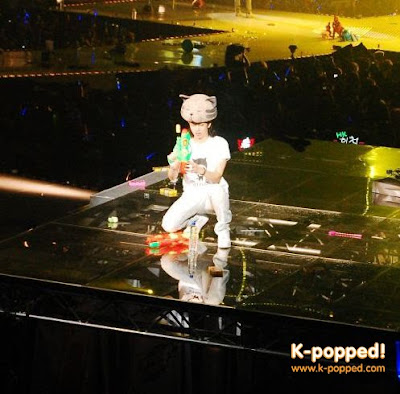 Point and shoot: ‘Where’s Super Blast on this thing?’ 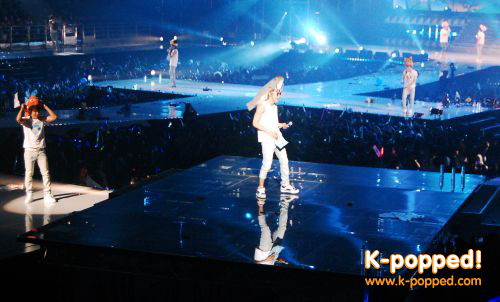 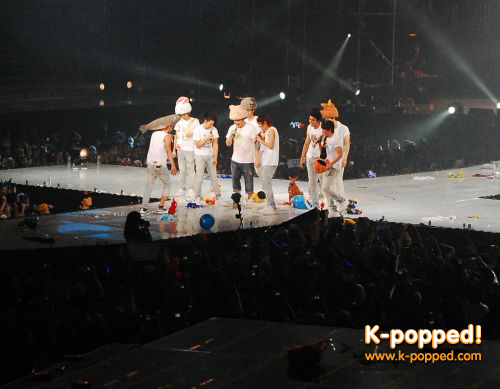 Attention: The SuJu boys are preoccupied by a wound up Teletubby
and mechanical cymbal-banging monkey


SuJu then gave a shout out to all their Asian fans – Indonesia, Vietnam, Hong Kong, Thailand and even China were represented at the concert. For the heck of it Siwon asked “America?” and the crowd did not respond which prompted him to say: “Asians are one.”

Eeteuk then mentioned that the group is working on their 4th album and asked the fans to go: “사집 대박” (The 4th album will be awesome) and asked Siwon to tell the fans (in Siwon’s English): “(We) appreciate about coming to our concert.” 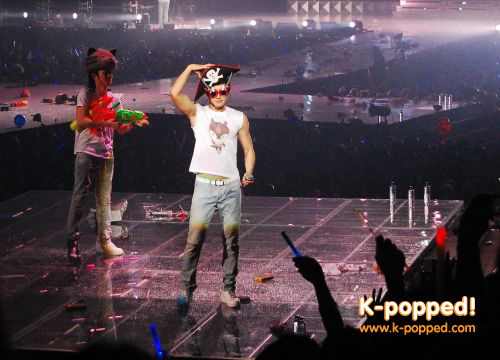 Pirate: Siwon is happy to be the master of the seas


Awww, we appreciate you guys for coming to Malaysia too, but maybe next time, less fooling around onstage towards the end and finish the show strong. 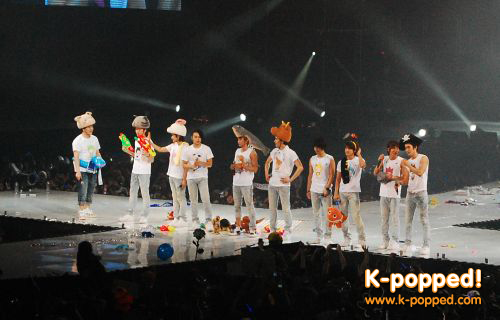 Final message: ‘Yeah, we need to relieve stress after working so hard.’ 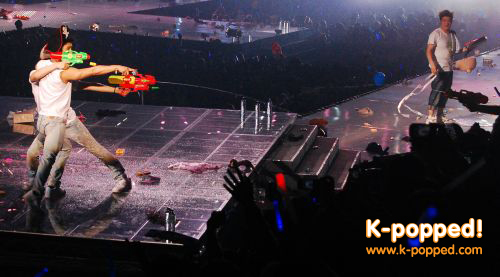 
The SuJu boys ended their Super Show 2 in Malaysia with the fan-pleasing Marry U. Oh, thank you very much…but I don’t know you that well ;-). 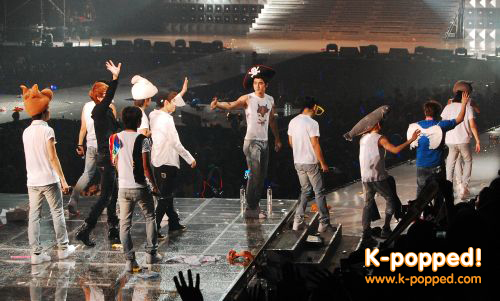