I’m no encyclopaedia on Kpop music and am only exposed to popular Korean tracks that are shown on Music Bank.

In Malaysia, we don’t have radio stations dedicated to Korean music…and while local Chinese radio stations play the occasional Kpop hit, I don’t tune in to them simply because I don’t understand Mandarin. 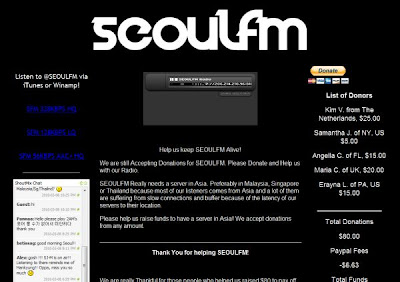 Need some Seoul music?: Tune in to http://seoul.fm


And so, I was pleasantly surprised when I stumbled upon SEOULFM, an online radio station that plays non-stop Kpop tracks or songs sung by Kpop artists.

You’ll hear the occasional Japanese and Chinese number, and there are a few non-K-popped! English tracks thrown in as well, but SEOULFM predominantly plays Kpop songs – I like :-). It’s something a Malaysian Kpop fan like me wants.

The team behind SEOULFM ran into a little bit of trouble recently as they could not afford to continue going on air. I hope you’ll help them by contributing either in cash or kind. SEOULFM, 아자 아자 화이팅!