2winS debuted early July with their mini album 2wingS and started off by promoting their title track 별놈 (Star), a fun rap number which did not have an MV. Bleeding, on the other hand, is a mellow song with a slower pace and features Seulong of 2AM as the lead male in the MV. 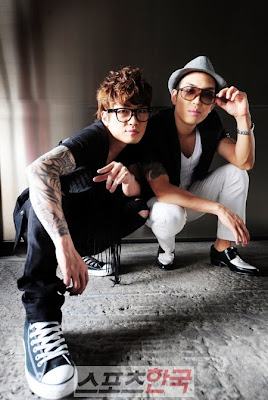 2WinS: The duo gets Seulong of 2AM to
bleed for their MV

For those still new to 2winS, the name actually stands for “2 winners” and the duo is not an actual pair of twins. They are instead made up of rapper TopBob (32) and vocalist Bumkey (26).

If TopBob seems familiar, that’s because he also makes up one half of another duo called TBNY. Bumkey is a singer who has been featured in many songs, most notably, Epik High‘s 바보(Fool).

Bumkey also spent some years in Los Angeles and speaks fluent English. It’s interesting to note that the lad lost his beautiful voice for more than 2 years after undergoing vocal chord surgery, and had to work hard to gain it back. After having gone through many obstacles, let’s hope that 2winS will eventually turn out as winners in the industry. 🙂

The Bleeding MV is actually rather creepy with its dark undertones. It even has a scene of Seulong cutting himself to give life to his lover (gasp!). Watch it after the jump and let us know what you think.

Losing blood and losing your girl. Could there be anything worse than that? ;|

As an extra, here is a video of our favourite superstar Rain with a short message about 2winS (in Korean) when they just debuted.